Conning money from the mice.

Kill the mice for good, so he can become rich with the money of them without providing any protection (failed).

Warren T. Rat (real name Warren T. Cat) is the main antagonist of Don Bluth's second animated feature An American Tail. He is a cat in rat's clothing, Fievel's first archenemy, and the leader of the Mott Street Maulers, a gang of dangerous cats who terrorize the mice of New York City. He is accompanied nearly all the time by his incompetent accountant Digit, a small British cockroach.

He was voiced by the late John Finnegan.

Warren T. Rat is first seen counting money in a human suitcase. His cockroach accountant, Digit, complains about his smoking habits. Warren, not caring in the slightest, suggests that he could fire him; Digit, however, seems to enjoy the idea, being extremely unhappy of his current work conditions. After Digit counts his money, Warren T. finds out that he has 50 cents less than yesterday, which upsets him since he hates to lose money. By chance, Fievel lands into Warren T. Rat's business area, where Digit tells Warren T. Rat that Moe, an associate of his, can always use an extra kid 50¢ a day. Warren T. Rat then introduces himself to Fievel, falsely promising to help find his family quoting a quote from William Shakespeare.

Later, Warren T. Rat takes Fievel to Moe's sweatshop, lying to Fievel that his family is in there and Moe grabs Fievel. Warren then comes up to the fat rat saying to him "Not bad huh, Moe? A new worker." When Fievel asks about his family, Warren tells Fievel that he doesn't need a family now that he's got a job, telling Moe to send him Fievel's salary before slamming the door on his way out.

He is later mentioned by Honest John during the wake for Mickey O'Hare, where it's revealed that Warren T. Rat is extorting money from other mice for protection from the cats that he never provides. This foreshadows what the audience discovers later during the movie.

He isn't seen again until late into the movie. Fievel runs into him in the Mott Street Maulers' Hideout, where he is poorly playing his violin (due to his nose getting in the way). Fievel finds out, after Warren removes his false nose, that Warren T. Rat isn't a rat, but a cat in disguise. When the rat-disguised cat sees Fievel and finds out that his true identity has been discovered, he has the Maulers capture Fievel, locking him in a birdcage to prevent his secret from being discovered and sends Tiger to guard him. However, when Fievel escapes (with help from his guard Tiger, who actually likes mice), Tiger gets fired from his position in the Maulers (which he finds a good thing, as he never liked Warren or his poor violin playing).

Warren, disguising himself as a rat again, then gathers his cat gang and chases after Fievel down to Chelsea Pier. Once there, Warren tries to negotiate peace with the mice by demanding all of their money and that they hand Fievel over so in order for the cats to leave them alone. When he orders Gussie to hand Fievel once again, Tony Toponi uses his slingshot to shoot straight through Warren T. Cat's disguise, revealing that he is a cat (his real name is Warren T. Cat) and all the mice pelt him with various objects at him. Realizing that he has all but lost, Warren then sets Chelsea Pier ablaze in a last ditch attempt to kill the mice with a fire for vengeance. Unfortunately, the mice's secret weapon: The Giant Mouse of Minsk (a huge mechanical mouse) chases Warren T. Cat and his gang towards the end of the pier and into the water.

The Maulers are then launched onto a tramp steamer bound for Hong Kong. Warren T. Cat climbs aboard an anchor, curses Gussie and Fievel's names, swearing revenge on all the mice one day. He is last seen reassuring his men that there are plenty of mice in Hong Kong. His last lines are "I wonder how you say 'trust me' in Chinese?".

Warren T. Rat is a very greedy, deceitful, manipulative, and diabolical individual who likes to think of himself as a sophisticated person, constantly misquoting Shakespeare. He also plays the violin horribly (though that might be because his fake nose kept getting in the way). He shows no actual care for his men; treating them as if they were like his employees and bullies them if they fail him.

He even threatened to eat Digit over him complaining about playing his (Warren T. Rat’s) violin horribly. Warren shows how ruthless he is throughout the film. Not only does he show no remorse for sending Fievel to a sweatshop, but he also had his men kill off mice to keep them in line all while posing as a rat to scam them. All of this makes Warren a horrible creature who would do anything to earn an extra fifty cents.

The only notable personality trait Warren has beyond his sadism and greed is his love for culture. Throughout the film, the one comedic trait Warren has is how terrible he is at the violin, though he claims this is due to his fake rat nose. While most of his men refuse to speak poorly about his lack of talent, Tiger despises his playing so much so that he was happy when Warren fired him. 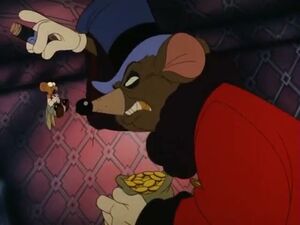 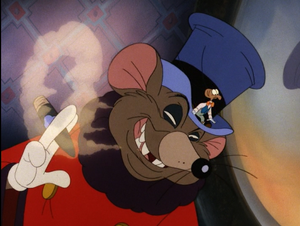 Warren T. Rat and Digit after Fievel has landed in their suitcase. 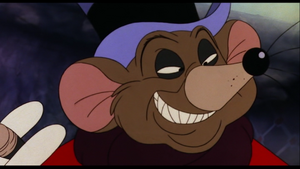 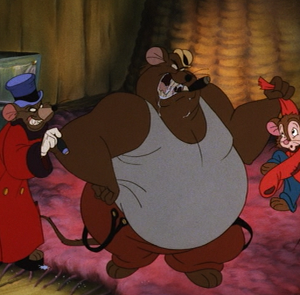 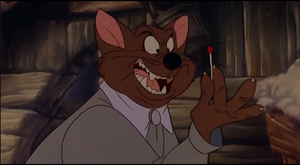 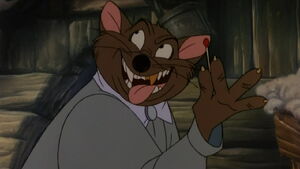 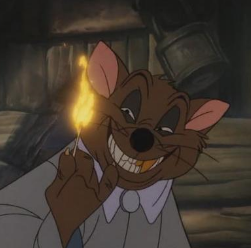 Warren T. Cat about to set Chelsea Pier on fire to kill the mice.