Member of the Inner Sanctum of the Templar Order

Collect the memories of subjects to find pieces of Eden.

Doctor Warren Vidic is a major antagonist in the Assassin's Creed video game franchise, serving as the main antagonist of the first five games' modern day storyline and a posthumous antagonist in following games and William Miles' archenemy. He was a member of the Inner Sanctum of the Templar Order who became a scientist of Abstergo Industries, working as the director of the Animus project, having subjects relive their ancestors memories to find pieces of Eden.

He was voiced by Phil Proctor, who also voiced Faustus in Blood Omen II: Legacy of Kain, Max in Tarzan,Russell Barnaby in Dead Rising, Simon Stagg in Batman: Arkham Knight, one of Frollo's Soldiers in The Hunchback of Notre Dame, one of the Grasshoppers in A Bug's Life, one of Rourke's Mercenaries in Atlantis: The Lost Empire, and the Anti-Recess Scientists in Recess: School's Out!.

Warren Vidic was born presumably during the 1940s to unnamed parents. He later became an employee of Abstergo Industries, a company that was a sub-set of the Templar Order and a high ranking member of the Inner Sanctum. Vidic was known to be unpleasant to work with, due to being deeply engrossed in his work in the fields of science. During the 1970s, Vidic used the young Nathalie Pash as a test subject to get a deep understanding of genetic memories.

His studies allowed him to further create prototypes of what would be known as the Animus, but Nathalie eventually learned that she was being held by the Templars after going through her memories, and escaped with the Apple of Eden. Vidic's theories created the Animus, but when he learned that his colleague Aileen Bock was competing with him with the surrogate initiative, Warren wiretapped offices to get information.

He would go on to see the creation of the Animus, and decided to take part in the project of seeing one's ancestors via genetic memories. He became the second subject, and viewed his ancestor, Geoffroy Thérage, who was the infamous executioner who killed Jeanne d'Arc. Around this time, Vidic kept an eye on Lucy Stillman, who was a member of the Assassin order and was tasked with infiltrating Abstergo. Impressed with her intelligence, Vidic recruited Lucy to work with him on the Animus, which she co-created alongside engineers. He managed to manipulate Lucy into defecting to the Templars, seeing that she was starting to feel isolated and distant to her mentor, William Miles. With Lucy by his side, Vidic started experimenting on subjects, most notably a young boy named Daniel Cross, whom was also known as "Subject 4". After having Cross relive his ancestors' memories, Vidic placed a subconscious impulse to assassinate his mentor if he ever met them.

Though Vidic and Stillman continued to experiment on other subjects, Warren grew impatient with their progress and ignored Lucy's warnings of keeping subjects in the Animus for too long. The most notable example of this is Clay Kaczmarek, who was known as "Subject 16" who's health started to deteriorate due to being kept into the animus for days. Do to being exposed to the animus for a long time, Clay began to suffer from the "Bleeding Effect", and he committed suicide after placing a imprint of himself into the Animus. Despite the loss, Clay's ancestry to Ezio Auditore da Firenze allowed the Templars to learn that he held a piece of Eden. The organization eventually learned that Clay was distantly related to William Miles' son, Desmond, who left the assassins at a young age.

In 2012, Dr. Vidic ordered Daniel Cross to kidnap Desmond, and have him place into an Abstergo facility in Italy so they could look into his ancestors. Progress with Desmond was slow, as Lucy feared of his health after Clay's death, and Vidic having to force Desmond to enter the Animus by threats. Due to Lucy fearing that Desmond would suffer from the "Bleeding Effect", Vidic was sometimes impatient with their progress, but would also put on a calm demeanor to manipulate Desmond. When Desmond reached the end of Altaïr Ibn-La'Ahad's memories, seeing him defeat Al Mualim and activate the Apple of Eden, Vidic recorded the map and informed the executives. After Lucy stopped Desmond from being killed by three executives, Vidic and her devised a plan to have Lucy break out Desmond to spy on him. She then went to Desmond to reveal that she was falsely a member of the Assassins, and learned that he gained the ability of eagle vision.

Vidic continued to falsely believe that Lucy betrayed Abstergo, allowing her to escape with Desmond from the facility to spy and inform the doctor. While Lucy was spying on Desmond's cell, Vidic created an email with the name "William M." to speak with Stillman, and tasked her with not allowing her emotions ruin the Templars plans. Warren appears towards the end of the game, as his agents had found Desmond's cell, but allowed the group to escape. During this time, Vidic had Templars agents be infused with the bleeding effect to have assassin skills. Though Vidic's plan was working, they would be undone when Lucy was killed by Desmond, who was influenced by Juno since she knew of Stillman's allegiance. Despite the loss, Vidic and the Templars would soon find the location of William Miles in Egypt.

The Templars successfully captured William and brought him to Abstergo, and Vidic sent Desmond and his cell a video demanding the Apple of Eden. Desmond showed himself at the facility, but refused to give Vidic the piece of Eden and killed Abstergo security guards. Angered by Desmond's retaliation, Vidic sent Cross to eliminate Miles and retrieve the Apple of Eden from his corpse. However, Cross suffered from a severe "bleeding effect" when he came close to the piece of Eden, and attempted to flee while suffering from a mental breakdown. Desmond then killed Cross, angering Vidic whom had a breakdown, screaming that the Templars gave peace and order. Vidic was then killed when Desmond used the Apple of Eden to make a security guard kill Warren, and had the other guards commit suicide.

Vidic's death caused the Inner Sanctum to fall apart, and his replacement Álvaro Gramática failed to unify the Templars towards a common gaol. The Templars then decided to start Abstergo Entertainment to continue looking for pieces of Eden, and managed to find evidence of the Sage Bartholomew Roberts during the age of piracy. Vidic's tapes that spoke of surrogate initiative were found by Abstergo, whom transferred them into their mainframe. A few of his tapes were accessed by a research analyst in Abstergo Entertainment, as the analyst hacked them. 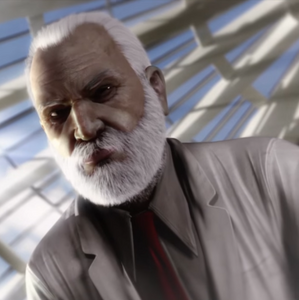 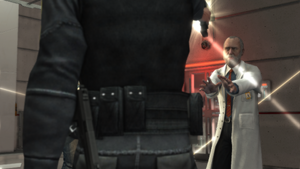 Vidic pleading for his life before being killed.