WaruMonzaemon is a minor villain in Digimon Adventures 01, Digimon Frontier, and Digimon Fusion. He is one of Machinedramon's henchmen, and is Machinedramon's right-hand. He was a Monzaemon that was infected with a virus, but was redeemed when Tommy showed kindness and played with him. He had hundreds of Numemon for his slaves.

WaruMonzaemon is an Ultimate Level Digimon that resembles a darker version of Monzaemon, except WaruMonzaemon's an old, roughed-up, evil teddy bear with a stitched mouth, cape, and with claws on his left paw.

In Digimon Fusion, WaruMonzaemon's appearance looks the same. The only difference is that he's wearing a chef's uniform, because he's Matadormon's chef.

The leader of the ShadowToyAgumon turned a Monzaemon into WaruMonzaemon, who kidnapped Tommy. After Agunimon and Lobomon defeated and purified the ShadowToyAgumon back into ToyAgumon, Takuya and Koji found Tommy playing a video game with the now purified Monzaemon, who revealed that because of the kindness Tommy showed him for wanting to play with him, the evil virus was vanquished.

A WaruMonzaemon was a henchman of Matadormon and he serves as his head pastry chef. He absorbed 11 of the Monzaemon soldiers to become GigaWaruMonzaemon.

Even if he slightly resembles Monzaemon, this Puppet type Digimon will despise you with his brutal face. It is said that his best friend is MetalEtemon, and evidence points to the fact that MetalEtemon bears a stuffed puppet version of WaruMonzaemon on his waist. Like Monzaemon, his real nature is unknown, but his shining eyes and mysterious presence give off a weird feeling to those who see them. He is as sly and maliciousness as evil itself. He equips his left arm with the "Bear Claw" taken from a grizzly bear, and is engraved with the Japanese character "惡". His special attack is "Heartbreak Attack", which makes everything feel depressed and dark-hearted. Those who do feel depressed after this attack will lose their will to fight. 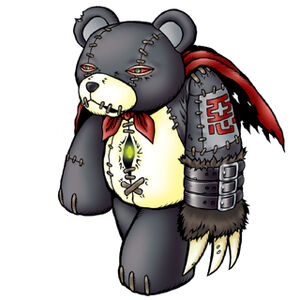 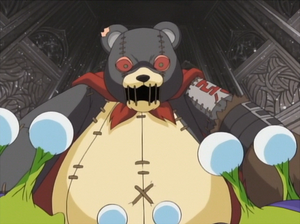 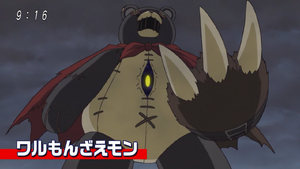