WaruSeadramon is a minor antagonist in Digimon World and in the anime reboot of Digimon Adventure.

WaruSeadramon resembles a color swap of MegaSeadramon, but the difference is it's a Virus type Digimon. It wears a black helmet, and has a golden blade horn on its head. It’s skin are dark red with green stripes with a white underbelly. It’s eye color is blue.

Angered, WaruSeadramon summons two Seadramons to attack, but were quickly wiped out by Zudomon. WaruSeadramon attempts to attack him, but was caught off guard by an arriving Lillymon. It and MegaSeadramon combined their attacks in the form of a water cyclone, but Sora and Garudamon finally destroy both of them for good with her Wing blade attack. 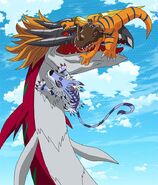 WaruSeadramon vs. Greymon and Garurumon 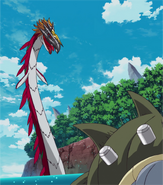