The Uncaged Wrath of Zaun

Hunt down criminals in Zaun

Warwick, also known as The Uncaged Wrath of Zaun, is a villainous playable character on the multiplayer online battle arena game League of Legends.

Originally a retired Zaunite gangster who wanted to escape from the sins of his past, Warwick was captured and experimented on by the cruel scientist Singed. Warwick died from the agony of the experiments, but his death was the catalyst to complete his transformation into a wolf-human chimera and brought him back to life. In his new life, Warwick now hunts the streets of Zaun for criminals.

He was released on February 21st, 2009, being in the game since its debut, and received a full visual rework on January 25, 2017. He is often played in the jungle.

While previously voiced by Brian Sommer, his current voice actor is unknown.

Warwick was a former gangster of Zaun who abandoned his life of crime. One day, he was knocked unconscious and kidnapped by Singed, who planned to use him as a test subject for his transmutation formula. He told Warwick that he wanted to unleash his true nature, a deadly beast within a "good man".

Warwick spent hours in agony while feeling every cut from Singed's scalpel, due to his belief that pain was the catalyst to the transformation, but the test subject also had machinery to heal him by pumping chemicals in his veins. Warwick's hand was cut off and replaced by a large clawed hand, which Singed believed to show his true potential. Finally, a chemical chamber was attached to his back and nervous system, and the chemicals would unleash his feral instincts whenever he had strong emotions.

Warwick eventually died from the pain, and Singed had to dispose of his body to his own disappointment. However, death turned out to be the catalyst to fully completing the transformation, bringing him back to life as a savage chimera dominated by primal instincts. He destroyed Singed's lab and began to hunt people in the streets. Recently, he had stopped killing indiscriminately when he saw the criminals of Zaun, which reminded him of his own past, and now hunts down criminals. Meanwhile, Singed had realized that his experiment with Warwick was a success, and wishes to retrieve the chimera he created in order to perfect his creations.

In game, Warwick is a diver-type champion, a mobile fighter that singles out high-priority targets. Warwick's passive, Eternal Hunger, lets his attacks deal bonus magic damage, and also heals him when he reaches low health. Warwick can also use Jaws Of The Beast to lunge and bite his targets, dealing damage based on their maximum health for lifesteal, and can also use Blood Hunt to detect a trail based on the scent of damaged enemies. He can also use Primal Howl to reduce damage to himself before howling to fear enemies. Warwick's ultimate, Infinite Duress, has him leap forward for a long distance, and if he hits an enemy champion he suppresses them and deals massive amounts of damage with his claws.

While not much is known about Warwick's past life, it can be assumed that despite his role as a gangster, Warwick still cared about the well-being of others and sought different ways to better himself, with Singed even describing him as a "good man". After Singed's experiments, however, little remained of the old Warwick or his memories, as he was replaced with a bloodthirsty, monstrous creature of pure wrath.

Warwick is a creature in constant pain and wants desperately to remember his past life, but alas his chemical mutations prevent him from seeking this out. He remains a proud Zaunite, and holds a special hatred for the wealthy Chem-Barons and Zaunites who abandon their city for Piltover. Warwick sees everyone around him as weak and pitiful, though hilariously enough, sees Yordles as "alpha predators", growing distracted by them like a dog would be by a squirrel. As a monster, the only thing Warwick knows now is violence, and although he mostly seeks out criminals and murderers, he knows that nothing will satisfy his bloodlust.

Singed experimenting on Warwick before his transformation.

Warwick's design after the rework. 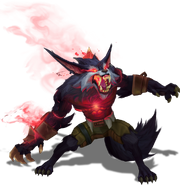 Warwick's appearance whenever Blood Hunt is activated.
Add a photo to this gallery

Warwick The Wrath of Zaun Champion Teaser – League of Legends

Warwick, the Uncaged Wrath of Zaun Login Screen - League of Legends
Add a photo to this gallery

Retrieved from "https://villains.fandom.com/wiki/Warwick_(League_of_Legends)?oldid=4056442"
Community content is available under CC-BY-SA unless otherwise noted.