Getting thrashed by both Maximals and Predacons.

Defeat the Maximals and win the Beast Wars.

Waspinator is a Predacon who works for Megatron. He is one of the six original Predacons who stole the Golden Disk. His beast form is a wasp.

Dawn of the Future's Past

Waspinator was ordered to assault on Predacon hangar, kill everyone in there, and secure an escape spacecraft while the rest of Predacons under Megatron's command was stealing Golden Disk from By-4, a secret Maximal facility. He was partnered with Buzzbomb, a Predacon loyal to Cryotek. After successfully accomplishing this task, Waspinator is reunited with Terrorsaur who proceeds to kill Buzzbomb. After eliminating Buzzbomb, Terrorsaur and Waspinator debates on what their escape craft's name should be: Darksyde or Buzzerbot. Eventually Terrorsaur's suggestion was won.

During this time Waspinator's alternate mode was a jet.

Waspinator often gets beat up or blown to bits. Waspinator did not become a Transmetal, as he was knocked into a repair chamber because of the quantum surge. Near the end of Season 3, Waspinator quit the Beast Wars, as he was tired of being evil and getting beat up. His final injuries were suffered when Quickstrike and Inferno blasted him.

After the Beast Wars ended and the Maximals captured Megatron, Waspinator finally found happiness on Earth, being worshipped by the protohumans as a god.

In the sequel, Waspinator rejoined Megatron on Cybertron after the protohumans kicked him out of their settlement for flicking rocks at their heads and grew tired of his rule over them. Once home on Cybertron, he was transformed into the Vehicon general Thrust.

He loved being a cool biker-bot as he now got respect and was finding chicks dig the new brooding bad boy slick and he also enjoyed being Megatron's new right-hand bot.

Thrust was one of the first of Megatron's Vehicon generals to be created, and was the last one to stand against the Maximals. He is commander of the Motorcycle Drones, he is a dark, cold, brooding type, and is absolutely devoted to Megatron's goals, even though he knows what it means in the end for him.

In the final battle, Cheetor removes Waspinator's spark from the body shell by extracting it.

After Optimus Primal makes the ultimate sacrifice in order to save the Maximals and defeat Megatron by reformatting Cybertron into a technorganic planet, Waspinator returned to his original Beast Mode body, but retains the head of Thrust and wanted glory and power, but Rattrap swats him away as Waspinator complains that he will never get what he wants. 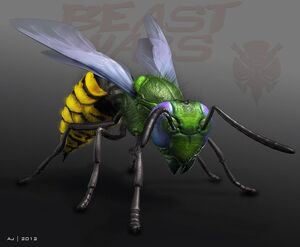 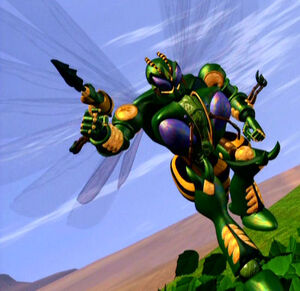 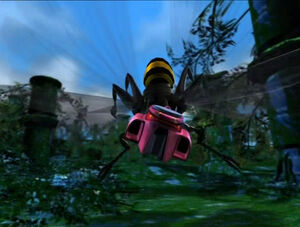 Retrieved from "https://villains.fandom.com/wiki/Waspinator?oldid=3470306"
Community content is available under CC-BY-SA unless otherwise noted.