Wasp, later known as Waspinator, is a minor antagonist in Transformers Animated. He is a mentally unstable former Autobot recruit who is obsessed with getting revenge on Bumblebee for outing him as a (false) Decepticon spy and destroying his life as a result.

He was voiced by Tom Kenny, with Bumper Robinson voicing him while impersonating Bumblebee.

Wasp served as a cadet in the same group as Bumblebee, Bulkhead, Longarm, and Ironhide (the latter of whom he would develop a strong friendship with). Right away, he took an immediate disliking to Bumblebee and would continue to bully and harass him and Bulkhead alongside Ironhide. Even so, the group's drill sergeant, Sentinel Minor, took a liking to Wasp, whom he dubbed as such for his accuracy with his stingers, while he gave Bumblebee his title for "bumbling" while trying to compete with Wasp.

Eventually, Bumblebee came across one of the cadets in a hanger secretly communicating with Megatron, as they had been sent to infiltrate the Autobots. Seeing Wasp exit the hanger soon afterwards, Bumblebee suspected that he was the traitor. Bumblebee unable to make any headway on his own, eventually turned to Longarm in order to get assistance in exposing Wasp. After a bit of careful planning, the two manage to discover a Decepticon communicator within Wasp's locker, which Bumblebee immediately presented to Sentinel Minor.

Wasp was immediately detained, with Sentinel Minor personally stripping him of his Autobot insignia. All the while the former cadet fiercely protested his innocence. Finally realising that his pleas were falling on deaf ears (or servos in this case), the enraged bot vowed revenge on Bumblebee before being wheeled away by Cliffjumper.

Many years later, Wasp escaped the Autobots' custody and seemingly eluded Sentinel Prime by jumping through a space warp. In truth, Wasp had hidden underneath the bridge until Sentinel left. Noticeably left mentally unstable and unhinged from his imprisonment, Wasp talks in third-person and his eyes have turned purple. His desire for revenge had not faded, however, and he vowed to make good on his promise: find Bumblebee (or "Bumblebot" as he now called him) and make him pay for ruining his life.

A Bridge Too Close

Although Wasp did not appear in this episode, his reference left a huge impact on Bumblebee. When Bulkhead pointed out that Megatron would be unable to land his troops on Cybertron without access codes to the other side, Bumblebee initially believed that this meant the escaped Wasp had now landed on Cybertron and was ready to do just that. No sooner did he say this than a gloating Shockwave appeared on a nearby screen, before revealing he had taken on the guise of Longarm Prime. At this revelation Bumblebee immediately realised that Wasp had indeed been innocent all along, set up by the real Decepticon spy. The young Autobot was, therefore, horrified to learn that he had sent an innocent bot to prison.

Unfortunately for the Decepticons, events unfolded, which allowed the Autobots to escape. Thus the stranded Autobots learned of Wasps innocence. This left Shockwave in a precarious position. His duplicity had been exposed by his own arrogance, and he knew that if Optimus' team managed to contact Cybertron with this information all of his work as an undercover agent could be undone.

Where is thy Sting?

Wasp later arrived on Earth being pursued by Sentinel Prime and his group, who still thought he was a spy. Like all transformers, he assumed an earth vehicle as a disguise, taking the form of a car identical to Bumblebees. Later he arrived at the Autobot base, where he waited until Bumblebee was alone. Confronted by the bot that he had wronged, Bumblebee desperately tried to explain the whole situation, stating that Shockwave framed him. Wasp, however, didn't care!

Instead, he assaulted Bumblebee knocking him to the ground. He then drew out a strange gun and removed his helmet before spraying Bumblebee in the face with some strange liquid. This knocked Bumblebee out temporarily, allowing Wasp to switch their helmets, voices and paint schemes, via an electric paint job, and to take his place. Unable to mask his face though, Wasp was forced to wear Bumblebees battle mask.

When the Autobots arrived back at the base, they believed that Wasp was Bumblebee and when Sentinel ordered his men to arrest Bumblebee (disguised as Wasp), he failed as Bumblebee escaped while the other Autobots followed. While they were gone again, Wasp tried to do the same activities as Bumblebee (mainly playing video games) but it didn't go well. Realizing that his deception could be undone if he didn't know the same things as his enemy, not aware that Optimus was trying to argue his case to Sentinel, Wasp then tried to get Bumblebee's memories.

Eventually, the Autobots arrived back at the base to check who is who after Bulkhead found out that Bumblebee was just disguised. He realized this when Bumblebee told him about an incident back at camp, which Wasp couldn't possibly have known about. Wasp, however, had successfully downloaded enough information to pass himself off as Bumblebee. Sentinel still suggested that they arrest both of them until Bulkhead proposed a solution. The two bots were ordered to face off in a videogame, Bumblebee was good at it, so whoever won it had to be the real one. Realizing he was about to be caught out, Wasp revealed himself, taking Bumblebee hostage, stating he was always a good bot. Bulkhead angrily told him that he was always mean to him and Bumblebee and, whilst he was innocent, was never a good bot. Enraged, Wasp shut off the lights and escapes, shredding his disguise.

Wasp remained on the loose but was still pursued by the Autobots. By this point, his innocence had been exposed, because of Shockwaves attack on Ultra Magnus. Although Optimus and his team, now wished to help the framed bot, and help him get his life back on track, the arrogant Sentinel still saw Wasp as a dangerous fugitive and wanted to take him back into custody. He initially escaped during an argument between Optimus and Sentinel but was soon cornered again.

Refusing to listen to Optimus or Bumblebee's pleas, the former Autobot was suddenly abducted by Swoop. He was then brought to Blackarachnia on Dinobot Island, supposedly for an offer which he could not refuse. Although hesitant at first, Wasp was eventually won over and accepted. He was stepped into a machine to combine his DNA with a real wasp. If his screams are anything to go by, it hurt a lot.

When Sentinel arrived, a completely mutated Wasp suddenly burst out of the malfunctioning machine. He had been transformed into a monstrous combination of wasp and machine, which towered over his former drill sergeant. Now bearing the insignia of the Decepticons, Wasp discarded his former self, taking on a new identity - dubbing himself Waspinator. He repeatedly attacked Sentinel and came to Blackarachnia's defense when the latter was attacked by the former, calling her his friend.

Despite this, he was swiftly knocked out of the room by Sentinel, colliding with another transformer. That transformer was Bumblebee! Along with the other Autobots, Bumblebee was shocked and horrified to discover what Blackarachnia had done to him.

Finally, face to face with the bot that ruined his life the much more powerful Waspinator stared menacingly down at his foe. When Bumblebee sincerely apologized to him, however, and indicated that he wanted to be his friend, this sturred something in the heart (spark) of the giant transformer. After a moments consideration, he decided that "Wasp" forgave his former accuser, much to Bumblebee's relief.

This moment was short-lived, however, as he then stated that "Waspinator" on the other hand would never forgive and preferred violent revenge. Blasting Bumblebee, Waspinator prepared to deliver the final blow. Before he could though, strange energy started to envelop him and started to lose control of his own body. Fearing for his life Waspinator rushed back to the lab in order to ask his new friend for help. There he overheard Blackarachnia gloating to the Autobots that she only viewed her new "friend" as another experimental attempt to cure her own organic infection, and did not care whether he survived or not, viewing it as the price of science.

Waspinator then made his presence known, much to Blackarachnia's horror. Now irate at yet another (this time intentional) betrayal, Waspinator, who appeared to have lost all trust in his transformer brethren, started attacking everybody - whilst ordering Blackarachnia to fix him. If that wasn't scary enough, Blackarachnia realised that the transwarp energy he'd absorbed as part of his upgrade process, had become unstable, possibly due to malfunctioning machinery. This effectively turned Waspinator into a giant walking bomb. Just as he reached critical mass, Blackarachnia sealed them both within a cocoon of her energy webbing, containing the explosion of transwarp energy.

Although the Autobots assumed that both Blackarachnia and Waspinator had perished they survived the explosion. Instead, they were teleported far, far away to a distant jungle. Waspinator, whose body had been blown apart, was last seen starting to repair himself, declaring he could not go offline, as "Waspinator have plans". 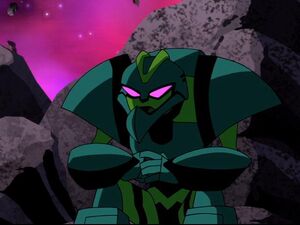 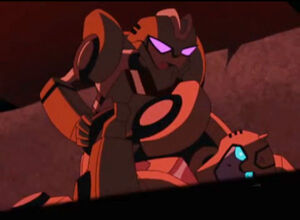 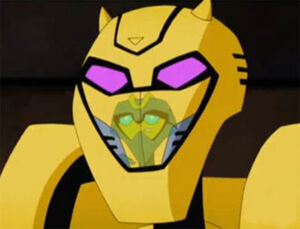 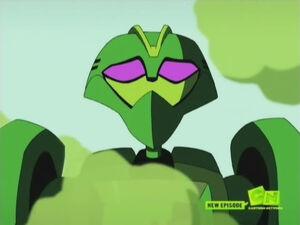 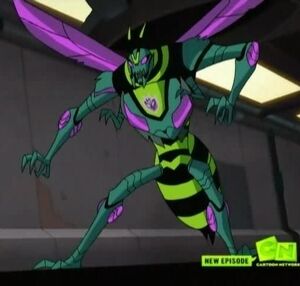 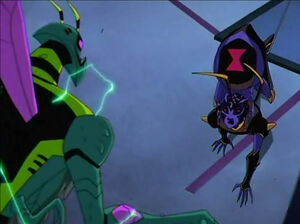 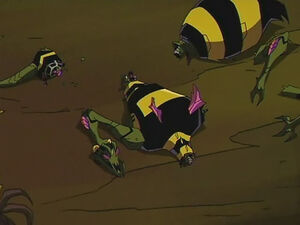 Waspinator piecing himself back together. 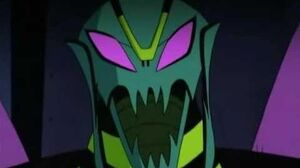