Watcher in the Water

Watcher in the Water

Latching onto prey with strong tentacles

Capture the Fellowship of the Ring (failed).

The Watcher in the Water was a supporting antagonist in the novel The Lord of the Rings and in Peter Jackson's film trilogy of the same name. It was a mysterious and horrifying monster with many tentacles that lived in a pool near the Westgate of Moria in Middle-earth. The lake was described by J.R.R. Tolkien as "…a dark, still lake" which was created by the damming of the Sirannon river, which was located on the west side of the mine of Moria.

According to the most ancient tales, Morgoth, the most powerful (and the most feared) of all the Dark Powers and the Valar, in his fortress of Angband, bred many terrible creatures for which there were no names in the Time of Darkness before the Valar kindled the Stars. In the following Ages, these creatures were a bane on land and in the dark waters to those who lived peacefully in the World.

Some of these beings of Melkor survived in the deep places of the earth in an ancient, dreamless, undisturbed sleep even until the Third Age of the Sun. It is told that when the fiery Durin's Bane was loosed upon Moria, another being came out of the dark waters beneath the mountains. This was one of the great Krakens, a massive creature with many tentacles and a slimy sheen. It was luminous green and had an inky stench emanating from its foul bulk. For many years, it lay patiently in the black water beneath the mountains.

Eventually, it came to the clear water of the River Sirannon, which flowed before the West-gate of Moria. There, it built a great wall in the riverbed and made itself a black pool, hideous and still. This being was the guardian of the West Gate that none could pass without challenge. It is not known why the Watcher guards the West Gate: It can be speculated that it is put there by the Balrog ruling Moria. Or it could've just been an animal that was defending its territory and had no connection to Morgoth or the Balrog.

During the time when Moria was being invaded by Sauron's Goblins, it built a dam in the river that was near the West Gate of Moria. During the attempted recolonization of Moria by Balin's expedition, the Watcher killed Óin when his reconnaissance party visited the West Gate. 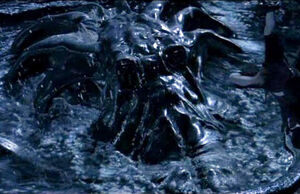 The Watcher's face, as seen in the film. 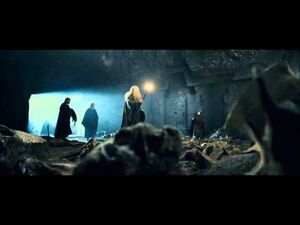 LOTR The Fellowship of the Ring - Extended Edition - Moria Part 2 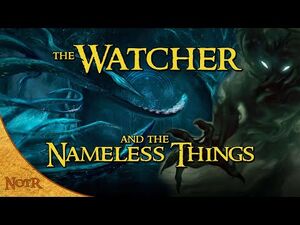