Elemental Man-Eaters
Water Horses (or sometimes spelled "Waterhorses" in some folklore) are mythical creatures with the appearance of horses that reside around river lochs, lake lochs, and seas, anywhere there is water. They are dangerous and predatory creatures said to drown and eat humans in the water.

While an entirely fictional concept, the basic idea of water horses may have started as a way to warn children to stay clear of horses they did not know, which could result in injury if the animal was startled or mishandled. It could also result in severe beatings by the owner of said animal, especially in olden days when the nobility had a great degree of power, and would have taken it very poorly to anyone disturbing their livestock or steeds.

Also, much like water-hags and spirits associated with bodies of water, these tales were spread further to keep children from playing near water, which would obviously be dangerous to them, with a risk of drowning. In the Far East, similar stories are told with creatures such as the Kappa, who serve a similar purpose in discouraging children from playing near streams or lakes.

The Ceffyl Dŵr is a water horse in Welsh folklore, similar to the Kelpie in Scotland.

The 1909 book Folk-lore and Folk-tales of Wales by Marie Trevelyan states that the Ceffyl Dŵr can shape-shift and even fly, though this varies depending on where you are in Wales.

For example, in North Wales, he is represented as being rather formidable, with fiery eyes and a dark forbidding presence, whilst in South Wales, it appears he is seen in a more positive light, at worst, a cheeky pest to travelers.

At best, as Trevelyan puts it, a "luminous, fascinating and sometimes a winged steed". The Ceffyl Dŵr is said to inhabit mountain pools and waterfalls. Even though it appears solid, it is seen to evaporate into the mist. In one form of the legend the Ceffyl Dŵr, as a horse, it leaps out of the water to trample and kill lone travelers.

Another form of the legend reports that the Ceffyl Dŵr entices the unwary traveler to ride him. Flying into the air, the Ceffyl Dŵr evaporates, dropping the unfortunate rider to his death.

The Nuckelavee is a monstrous type of fairy found in the folklore of Scotland and the Orkney Islands. It is as far removed from our modern conception of a fairy as possible and its name is still considered unlucky in some parts of the Scottish Isles.

A horrific demon of the seas, Nuckelavee was a godlike horror that was intangible and invisible while in the sea, taking corporeal form only once it reached land.

The form it took was akin to a living nightmare, and was described as either a horse, a man, or a fusion of both. In both forms, the fairy was skinless, with pulsating veins and muscles exposed.

Nuckelavee was gigantic in size, yet its features were grotesquely mismatched. With a head so horribly large, it would roll to one side, and its arms were so long, they'd drag along the ground.

In addition, Nuckelavee's hands were monstrously huge. It would often have only a single Cyclops-like eye on its head, and the horse's legs were said to be akin to flippers.

Further horror came from Nuckelavee's gaping mouth, filled with rotting fangs and a supernaturally putrid breath that could strike living beings dead or infect them with disease. The creature spread all manner of catastrophe to mankind, and was said to be responsible for plague, famine, drought and more. According to legend, the Nuckelavee's power was only rivaled by its undying hatred of humanity.

The burning and harvesting of seaweed was said to invoke the Nuckelavee's wrath even more than usual, and in retribution, the evil fairy would inflict the islands' horses with a deadly disease known as mortasheen.

Only two possible ways existed to stop the Nuckelavee, being the fairy's inability to cross freshwater, and the intervention of a benevolent spirit known as the "Sea Mother", who held the power to undo Nuckelavee's curses and drive the demon back to the depths. (She was presumably a powerful fairy or angel, perhaps even an aspect of some ancient goddess)

The Each Uisge (Scottish Gaelic: [ɛxˈɯʃkʲə], literally "water horse"), also sometimes spelled "Each-Uisge" and also called called the "Each-Uisce" (anglicized as "Aughisky"), is a malevolent water-spirit from Scottish mythology, and is similar to the Kelpie but regarded as more dangerous. Said to inhabit the Highlands of Scotland, the Each Uisge was believed to be the most dangerous of all water-dwelling spirits in the British Isles.

Often mistaken as the Kelpie (which was said to inhabit streams and rivers), the Each Uisge lived in the sea, sea lochs, and fresh water lochs.

The Each Uisge was a shapeshifter and would disguise itself as a fine horse, pony, or handsome man. On rare occasions, it was depicted as a hybrid of man and horse.

While in the form of a horse, the Each Uisge was safe to ride as long as the creature was kept far away from water, for even the faintest smell of water triggered the Each Uisge's murderous nature. Its skin became adhesive, and the creature immediately went to the deepest part of the Loch with its victim so as to drown its victim. After the victim had been drowned, the Each Uisge would tear them apart and devour them entirely, save for the liver.

Much like the Kelpie, this creature was greatly feared in the Highlands, and until fairly recently, people were often wary of lone animals and strangers lurking by bodies of water in secluded areas of the Highlands.

The Kelpies, also called "Water Kelpies", are a type of water spirits described in the folklore of both Scotland and Ireland, and they are said to haunt rivers and lochs, and were usually malevolent, although rare cases of benevolent or neutral Kelpies exist. Although dangerous, the Kelpies was not regarded as evil as the Each Uisge creatures, which was a similar type of water-demons in Scottish mythology.

A Kelpie often took the form of a lost pony with either black or white pelt. In each form, it was said to have a mane that was constantly wet. If required, a Kelpie could take the form of an attractive woman or man to lure people to their fate, and the spirit specialized in drowning its victims before devouring them, leaving only a heart or liver behind.

While in the form of a pony, a Kelpie was said to tempt people to ride it, but as soon as their victim touched the creature, they would become stuck as if glued onto the beast. The Kelpie would then go into a charge towards the nearest body of water, leaping into it and drowning its unwilling rider before feasting.

Like many of Scotland's legendary demons, the Kelpie is regarded as a type of fairy as well as a spirit of the dead, presumably that of people or animals that have drowned. They were greatly feared by those who believed in them, and even in fairly recent times, some people were afraid of approaching unfamiliar ponies in the wild.

The Bäckahäst or Bækhest (meaning "brook horse") is a water horse from Scandinavian myth. It is often described as a majestic and graceful white horse that appears near river lochs, particularly during when weather is foggy. Anyone who climbs onto its back would not be able to get off again.

The horse would then leap into the river, drowning its rider. The Bäckahäst can be harnessed and made to plough, either because it tricks its potential rider, or because the person tricks the creature into wearing the harness.

There is a tale of the Bäckahäst who attempted to trick a maid into riding it, but the maid, realizing the creature for what it is, steadfastly refused and threatened the brook horse into ploughing. The brook horse then traded its place with the farm horse, and using its supernatural agility, finished the ploughing in a blink of an eye.

No sooner than finishing its labor, the Bäckahäst rushes onto the lake, with the maid and the plough attached to it and being dragged by the creature. Lucky for the maid, she had a piece of steel in her pocket, making the sign of the cross. She immediately fell down on the ground, and she saw the Bäckahäst diving into the lake with the plough. She heard a frustrated neighing when the Bäckahäst realized that his trick failed.

A Tongie or Tangie is a water horse creature with the power of shapeshifting in the folklore of the Orkney and Shetland Islands in the British Isles. Depicted as a sea horse or merman, it takes on the appearance of either a horse or an aged human. A Tongie is usually described as being covered with seaweeds. It is known for terrorizing lone travelers, especially young women on roads at night near lochs, whom it will abduct and devour under the water. A Tongie is also said to cause madness in humans and animals.

A Tongie plays a major role in the Shetland legend of Black Eric, who is a sheep rustler. The Tongie rode by Black Eric gives its rider supernatural assistance when he raided and harassed surrounding crofts. In his final battle and defeat at the hands of the crofter Sandy Breamer, Black Eric fell to his death in the sea. Eric's Tongie, now on the loose and without a master, continued to terrorize the area and abducted ill-fated young women.

A Cabyll-Ushtey is a mythological, carnivorous and semiaquatic equestrian hailing from Manx, on the Isle of Man. This variety of the water horse is a monster that, while not as dangerous or greedy as the Each Uisge, may still seize livestock and people from land, and eat them in lakes or in the sea. This creature is said to lurk beneath the surface of numerous highland water holes.

Wihwin is a malevolent water spirit from Central America, particularly associated with the Miskito tribe. Although normally a demon residing on the sea, it prowls through mountain ridges during the summer months. This equine monster is said to possess "jaws fenced round with horrid teeth", which it uses to consume humans and other prey it finds on its nocturnal hunts.

Nuggles are a specific type of fairy creatures found exclusively in the folklore of the Shetland Isles, they are cousins of the more known Kelpies and in some studies are also considered distant relations to the Orkney water-demon known as the Nuckelavee.

Like Kelpies the Nuggles are shapeshifting equine spirits associated with water, they can take the form of a well-fed Shetland Pony or a human but are exclusively male in all forms - they are also distinguished from their cousins by having unusual tails that are said to resemble wheels, due to this Nuggles often tried to hide their tails or only came out during the night or in other periods when vision would be obscured.

Not malevolent like the Nuckelavee and slightly less malicious than the Kelpies the Nuggles were fond of pranks but did employ mercy, though like all water horse spirits they would attempt to drown any unfortunate individual who tried to ride them - according to local lore only the magical beings known as Finns could ride a Nuggle without being dragged off to such a fate.

Nuggles were prone to mischief but seen as deceitful and not very brave, unlike many fairies they were not seen as terribly spiteful and tended to enjoy scaring islanders rather than outright attacking them (a trait shared with another Shetland fairy known as the Trow).

These water-horses are known to be unique individuals in folklore and thus treated as villains in their own right, with their own articles: 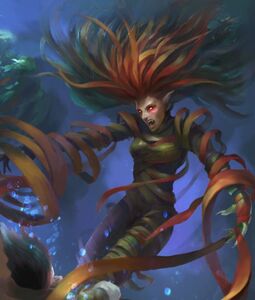 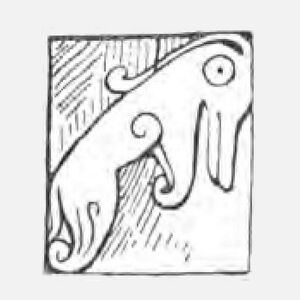 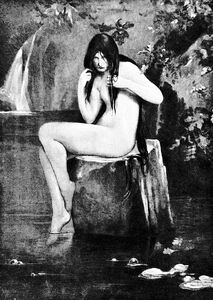 A Water Kelpie in human form. 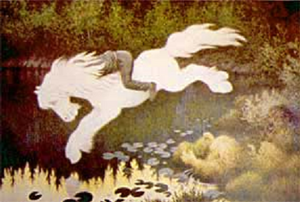 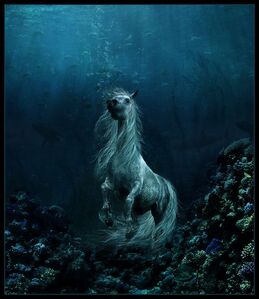 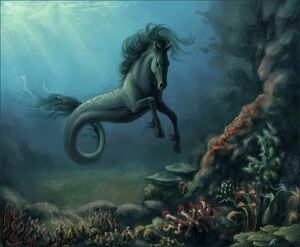 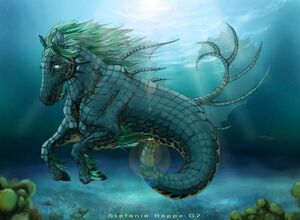 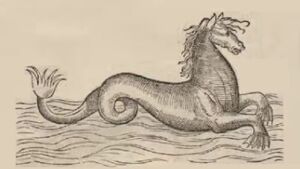 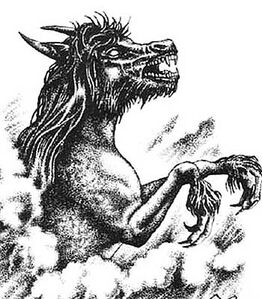 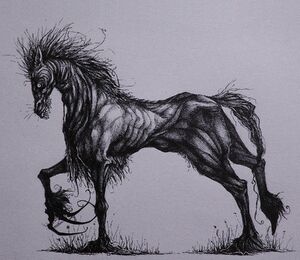 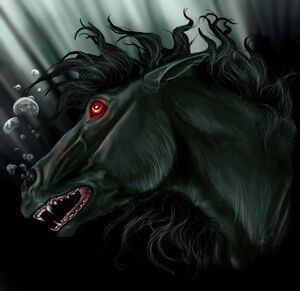 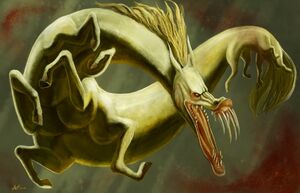 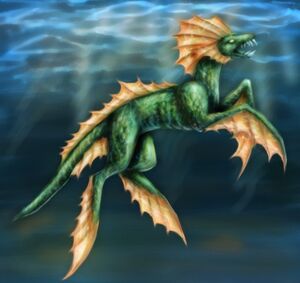 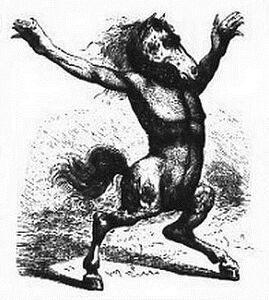 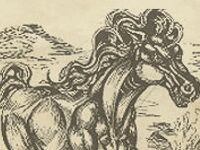 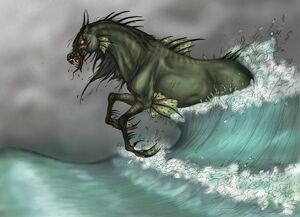 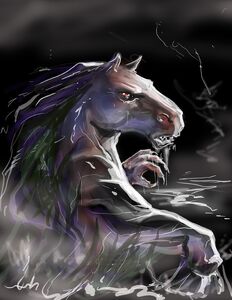 Retrieved from "https://villains.fandom.com/wiki/Water_Horses?oldid=4178763"
Community content is available under CC-BY-SA unless otherwise noted.