Crush Pikmin and their leaders.

The Waterwraith is an antagonist and boss from Pikmin 2 that lacks a physical form in the Pikmin dimension. It is found on all sublevels of the Submerged Castle, which only Blue Pikmin can be brought into, although it is possible to find Bulbmin on levels two-four and White Pikmin on level three. It rolls around using two massive stone rollers and tracks down the captains and their Pikmin to crush them. Its only weakness is the strength of the Purple Pikmin, which can anchor it into Olimar's dimension.

While traveling through the floors of the Submerged Castle, the player must clear the first four floors quickly, because after five minutes, the Waterwraith will fall from the ceiling with its rollers and automatically chase after the active captain, no matter where he is. On the first four floors, it is useless to attack the Waterwraith, even when petrified with the Ultra-Bitter Spray, as it is physically present in another dimension and thus there is nothing for the Pikmin/Bulbmin to attack. However, since it only chases after the active captain and will not chase him in tight corners or dead-ends, as well as kill every enemy and deactivate all traps it rolls through, one could use this as an advantage to collect the remaining treasures and escape to the next floor. It cannot tear down gates.

Two Waterwraiths appear in the Bully Den, the 28th level in challenge mode, both appearing once the timer clicks 270, leaving only 30 seconds of preparation. It is tricky dealing with two Waterwraiths, but both should go down easily if a second player is active. One drops the Key and the other drops the Silencer. 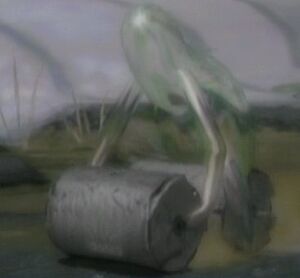 The Waterwraith in the Piklopedia.
Add a photo to this gallery

Retrieved from "https://villains.fandom.com/wiki/Waterwraith?oldid=3869632"
Community content is available under CC-BY-SA unless otherwise noted.