Member of the Imperial Navy (formerly, transferred to the Jaegers)
Imperial Soldier (formerly)

Enforce wills of The Empire (formerly).

Protect Kurome at all costs.

Wave is a major antagonist of the manga/anime series Akame Ga Kill!. He is an Imperial Soldier who served in the navy until he was transferred over to the Jaegers as one of the group's members.

He is voiced by Yoshimasa Hosoya in the Japanese version of the anime and David Matranga in the English version, the latter of whom also voiced Bertolt Hoover.

Wave is a young man of above average height with short dark blue hair and eyes. He wears a blue jacket and a orange scarf with an anchor on it. Under that is a white shirt with a single blue line down the middle. He also wears a pair of grey jeans with a belt and dark blue boots. He carries his Teigu on his back.

He keeps his beliefs close to heart, such as duty to his country and cheering up a girl when she's sad. He is a true navy man at heart and loves everything to do with the ocean. He is shown to be level headed and easy going in his free time and has a desire to be useful to his friends.

He is shown to get along well with most of his comrades, excluding Seryu. He sympathized with Tatsumi's desire to run away from the group but was duty bound to prevent it. Despite constantly finding Bols choice of attire very strange and wondering how a man of that sort is the only married member of the Jaegers, he is on very good terms with the man and seems to think highly of him. He constantly tried to cheer up others, which usually fails and causes him to end up being cheered up by Kurome. Following the death of Bols and Kurome's admission of her fear of being discarded, Wave seems to have grown extremely protective of the latter, showing his closeness to the two of them. However, he was utterly horrified by her decision to keep Run alive as one of her puppets, believing it was causing him more harm than good.

He believes Night Raid to be evil due to the fact that they are killers who work under the cover of night, which is actually a very rational conclusion for someone from outside of the capital to have. However, after spending time in the capital itself, he has grown more cautious of it. He is cautious of Seryu because of her brutality and insanity, both of which he states surprised him, in that he did not believe the capital had grown bad to that extreme extent. He was also shocked by the fears Kurome suffers of being abandoned and executed, which again tracks back to the empire.

Tatsumi himself has admitted that Wave, despite his own willingness to kill him if it comes to it, isn't evil, in fact he seems almost moral, a thing sorely lacking in those usually affiliated to the empire.

Wave was born and raised at the country side probably near the sea. Wave joined the navy due to the help of certain someone who he respected. At some point in his life he come to possess the Grand Chariot Teigu. After unknown time he was called from his village in order to be part of six maned group that was requested by Esdeath. While his mother was worried about him leaving his father told him to give the enemy hell.

When he first arrived at the meeting room for his new group, he first encountered Bols, who stared at him awkwardly until the rest of the crew showed up. He quickly took a liking to Run, who was in his opinion the only other "normal" person present.

Later, the Jaegers are ordered to eliminate a group of bandits. Wave assists his comrades in their attack on the hideout, while Esdeath and Tatsumi watch from afar. He was unable to show off much of his skills, but managed to "save" Kurome from a bandit attacking her from behind.

When members of the Jaegers go hunting on Mt. Fake, and the group is split up into pairs, Tatsumi and Wave are put together. The two of them talk of how similar they are to each other, before they are attacked by danger beasts. They work together to take out the beasts, and using the confusion of battle, Tatsumi escapes using Incursio. Knowing the cruel punishment in store for him when Esdeath finds out he let Tatsumi get away, Wave summons Grand Chariot and goes looking for him. At a nearby waterfall, the two encounter each other, unable to recognize each other due to their armor teigu. Wave recognizes Incursio as a Teigu owned by Night Raid member Bulat, and attacks. Tatsumi again attempts to get away, but is hindered by Wave, who tells him that he's heard of Night Raid, and that they are villains who murder innocent people. Tatsumi angrily replies that Night Raid are nothing like villains, and once again attempts to escape, but is knocked into the river by Wave. Tatsumi uses Incursio's stealth ability to escape down the river. The next day, Wave is punished and reprimanded by Esdeath for his failure.

He's later seen with Kurome following her period of rest after Chelsea's attempt to assassinate her. When Kurome is showing signs of struggling to keep up despite her injuries, he shows great concern for her and resolves to fight strong enough to protect her and carry her weight. Later he is seen struggling to cope with the atrocities committed by Wild Hunt, managing to hold back his anger from one incident, but later is brought to breaking point when Bols' wife and child are murdered by them at his grave, finally snapping when Syura threatens Kurome as she checks on him struggling to contain his anger, and punching Syura directly in the face.

During the fight between Kurome and Akame, he stops the fight all by himself and destroys Kurome's teigu after confessing his love to her. He then decides to keep Kurome safe by taking her to the hot springs where she can fully recover from her injuries and weakness sustained by Chelsea and is later seen with Kurome eating cake with him after the two of them defected.

Wave wields the Armor type Teigu, "Grand Chariot," which is a more attack oriented version of Incursio. It is unknown which Teigu is stronger, as Tatsumi was unwilling to fight Wave. The Teigu increases his strength and speed. It also gives him the ability to fly. He has a technique named "Grand fall" which is a powerful kick. While his Teigu is engaged he is capable of taking on three Night Raid members at once and was referred by them to be a force of nature. Wave is also a formidable swordsman and uses his sword more than his Teigu. Esdeath has said that his strength is perfect, thanks to having a good teacher. His skill has been compared, by himself, to Tatsumi, in that while he admitted Tatsumi didn't fight back, he knew that their strengths were near equal around the time they fought. While he was aware of dangerous creatures inhabiting the ocean, he was caught off guard by creatures living in the mountains, likely due to his lack of first hand experience in dealing with them at the time. It is also worth noting that he is the only one in the series who managed to land a clean, direct and powerful blow to Akame. 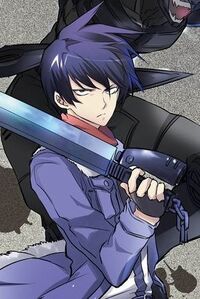 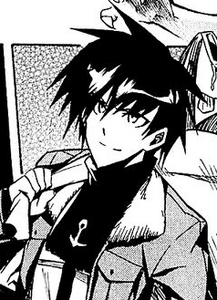 Wave in the Manga. 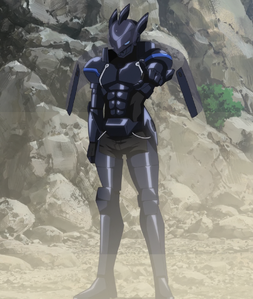 Wave in his Grand Chariot Teigu. 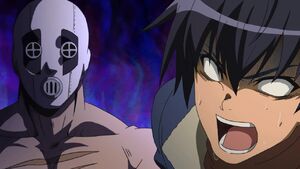 Wave creeped out by Bols. 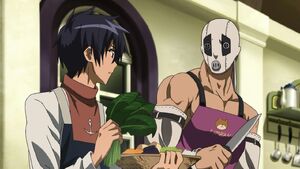 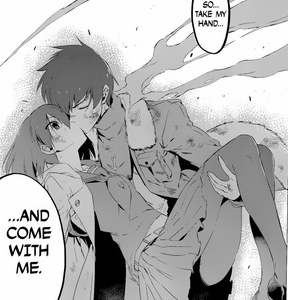 Wave confesses his love for Kurome and kisses her.