Robotic Minion
Wave Man is one of the eight Robot Masters and antagonist of Mega Man 5.

Wave Man is a blue robot with a yellow X on his body where there is a metal hose connected to his mouth. Wave Man has a yellow emblem on his blue head. Wave Man's left hand is a cannon that can shoot water while in his right hand is a harpoon.

In battle, Wave Man can create a water pillar from the floor where Mega Man is in, firing a harpoon and jump towards Mega Man, his weakness is the Charge Kick, after his defeat, Mega Man obtain the Water Wave. Wave Man returns on the boss rush where he's defeated again.

In Mega Man of the Game gear, Wave Man is boss of the first Wily stage, his moveset are the same, his weakness is the Mega buster.

Wave Man appears in the episode "20,000 Leaks under the Sea" of the Mega Man cartoon. 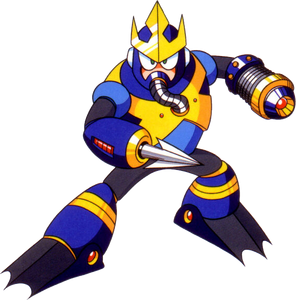 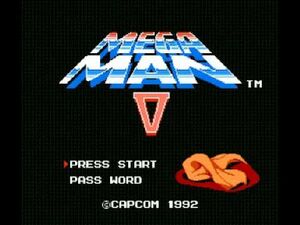