Member of the Babylon Rogues

Mocking the Skills of others.
Making fun of Storm.

Wave the Swallow is a recurring anti-heroinic antagonist in the Sonic the Hedgehog series.

She one of the Babylon Rogues, with Jet and Storm. She is the most level-headed of the three, taking charge whenever Jet cannot get things done. She does not get along well with Storm, and is a rival to Tails (who is friendlier towards her than she is towards him).

She was voiced by Chie Nakamura in Japanese, and Bella Hudson and (currently) Kate Higgins in English.

Jet, Wave, and Storm entered a Grand Prix on Dr. Eggman's behalf to get the Chaos Emeralds and go to Babylon Garden for its treasure. Wave quickly became Tails's rival when she insulted his Extreme Gear, but secretly acknowledged that it was powerful and planted a bomb on it. Wave won her race against Amy, but lost to Tails. When Storm lost to Knuckles, Wave said that his skills suck. When Jet lost interest in the treasure of Babylon Garden, learning that it was a form of technology instead of a gem, Wave convinced him to continue his search since it could still be of value if a genius like Eggman was interested in it.

When Sonic nearly won his race against Jet, Wave detonated the bomb and blew up his Gear, causing Jet to win. The Babylon Rogues went to Babylon Garden, where Wave and Storm nearly got into a fight with Tails and Knuckles, but a fight was averted when E-10000R ran in with his squad of E-10000Gs, forcing them to retreat.

Eventually, Wave raced alongside Jet, Storm, Sonic, Tails, Knuckles, and Amy against the Babylon Guardian, destroying him and obtaining the treasure it was guarding, a flying carpet. The Babylon Rogues went their separate ways from Sonic's team, acknowledging each other as worthy opponents.

Wave, Jet, and Storm were more rivals to Sonic than villains at this point, racing Sonic's team to get to various locations as they sought to obtain the five Arks of the Cosmos. Wave held onto them once the Babylon Rogues got all five of them, but SCR-HD took them from Wave, injuring her in the process (to which Tails tried to help her up). When SCR-HD transformed into Master Core: ABIS and opened the black hole at Babylon Garden, Wave raced alongside Jet, Storm, Sonic, Tails, Knuckles, and Amy to destroy ABIS and save the world.

By this point, the Babylon Rogues were simply rivals to Sonic, competing in a Grand Prix, ending with the four teams racing against Eggman.

If the player controls Team Babylon, however, Wave still cheats to win, as she sabotages Team Heroes' Gears without Jet's knowledge or approval, prompting Jet to seek a rematch to avoid his reputation being ruined. If the player controls Team Heroes, however, Wave does no such thing, and Jet's gear has mechanical trouble, causing Sonic to seek a rematch to be fair.

In the Archie Comics, Wave worked as an engineer for the Battle Kukku Empire, being the assistant of Dr. Fukurokov. However, she made unauthorized changes to the Battle Fortress that Fukurokov hated simply because he was jealous of her skills. He had her thrown into the brig. There, she found two other prisoners; Jet the Hawk and Storm the Albatross.

Jet broke them out soon after, and Wave decided she would go with them. Eager to get revenge on Fukurokov and the Battle Bird Armada, they discovered the Babylon Guardian, and took it for themselves. They formed the Babylon Rogues, which Wave became the mechanic of. 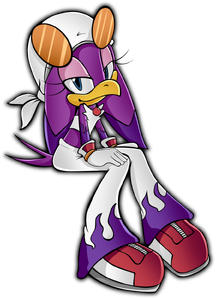