Ability to survive limbs being severed

Hanging out during the night.

Get rid of the Pines family and rule the night once again.

Kill Stan Pine for locking them up and forgetting them for 10 years (both failed).

Possessed Objects
The Wax Figures are the main antagonists of the Gravity Falls episode "Headhunters". They are presumably lead by Wax Sherlock Holmes.

Wax Sherlock Holmes and the other thirteen wax statues were stolen by Grunkle Stan from a Garage Sale. They soon became a tourist attraction as the Gravity Falls Wax Museum and during waxing moons, they came alive and ruled the Mystery Shack and caused mayhem. However, the wax museum was forgotten by Grunkle Stan and the statues were locked in a room; the door being covered in wallpaper.

Wax Sherlock Holmes and the rest of the wax statues begin to plot their revenge against Grunkle Stan while inside. Eventually, Soos discovers the mysterious door by placing the fallen door knob back into the hole and reopening the storage room. Mabel then hatches an idea to build a wax statue of Grunkle Stan, but when it is later presented to the public, a news reporter points out that the flyers specifically read "free pizza" and that Stan was ripping them off. This upset many of the tourists, who left angrily.

The statue of Stan is later found headless. This is the act of Wax Sherlock Holmes who had utilized their freedom as an advantage to kill Grunkle Stan. However, the wax figures accidentally get wax Stan instead. Dipper then interrogates each of the suspects for evidence.

After Dipper finds out that the real culprits were the wax statues, Wax Sherlock Holmes came alive and assaulted the twins along with the other statues. He fought with Dipper who led him upstairs and outside through a window. Then, he started to melt because of the rising sun. His remains then slid off the roof and fell onto the ground. 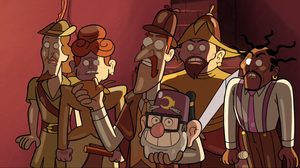