Collecting junk
Tormenting Lucien and others.

Wayne Cramp is the main antagonist of The Cramp Twins. He is the evil younger twin brother of Lucien. He was voiced by Tom Kenny.

Wayne demonstrates many of the typical crude habits associated with bullies and kid antagonists like name-calling (typically his preferred insult of "girlpants"), harassing his brother, and physically assaulting others. At times, he demonstrates borderline sociopathic behavior in his treatment of Lucien. And, unfortunately, he often manages to get away with his misdeeds by somehow convincing others that he's a "good boy" in a falsetto voice. However, he resents the attention he receives from his admirer Wendy Winkle, the daughter of his father's boss and sometimes is victimized by her actions. While frequently being a Karma Houdini, he does also face retribution for his actions a good chunk of the time.

Wayne also loves collecting junk and is friends with the junkyard owner Dirty Joe. In the mornings, he won't function until he's had sugar, usually via cereal. On some occasions, his sugar cravings borderline on addiction.

However, there have been a few occasions where Wayne showed a considerably more compassionate side, although some of them were a tad warped. Such an instance was where Wayne cared for a rabbit he named "Hankenstein" (although he liked the rabbit for its violent tendencies and habit of attacking Lucien).

Wayne has girl problems as he is terrified of Wendy Winkle who is in love with her and tries to escape from her.

Most of the time, Wayne is particularly antagonistic towards his older twin Lucien who is often the unfortunate victim of his pranks, schemes and fads. In most cases, Wayne will assault Lucien for no other reason than to victimize his brother. Among such acts include:

His acts extend beyond the family at times.

The Fight for the Fox Box

Wayne also was the perpetrator of the (non-canon) Fox Box crossover event The Fight for the Fox Box wherein he spoke to villains Utrom Shredder, Dr. Eggman, Dr. K, King Dedede, and Dialbolic about his plot to destroy the Fox Box while disguised as an altered voice. Using stolen codes, he cuts off the Fox Box's transmission and distributes the codes to the five villains. All five villains are defeated and, much to Wayne's chagrin, Donatello creates a (now defunct) website where the recovered codes could be entered to save the Fox Box. At the end, he is revealed to the audience to be the antagonist, although he gets away with it and knocks Lucien down the stairs. Considering the eventual cancellation of the Fox Box block, Wayne's plot succeeded. 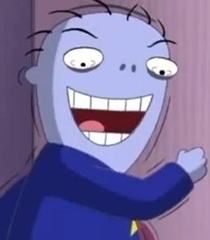 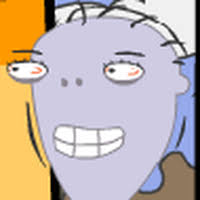 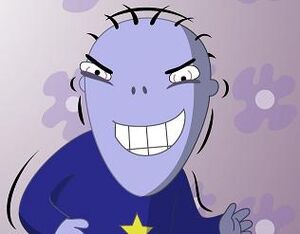 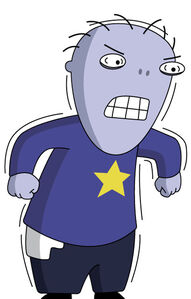 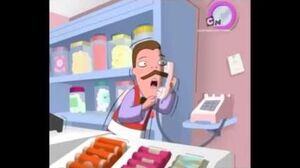 Animated Atrocities -67- "Spit Collector" -The Cramp Twins-
Add a photo to this gallery
Retrieved from "https://villains.fandom.com/wiki/Wayne_Cramp?oldid=3713243"
Community content is available under CC-BY-SA unless otherwise noted.