Spree killer
Wayne Randall is a minor antagonist in Season Seven of Dexter. He is the former boyfriend of Hannah McKay, with whom he went on a killing spree in 1997.

He was portrayed by Daniel Buran.

In 1997, Wayne and his girlfriend Hannah went on a three-state killing spree during which Wayne killed six people. Eventually, the two captured, and Hannah, who was only fifteen at the time, cut a plea deal which had her testify against Wayne in return for being placed in a group home rather than going to prison, leading to Wayne receiving two life sentences.

Fifteen years after the murders, Wayne offered to show the police the location of three victims buried in Miami, supposedly to clear his conscience. After arriving in Miami, he was entrusted to Miami PD officers Debra Morgan and her brother Dexter.

After several days of fruitless digging, sunshine and frosty swirls, Wayne began reminiscing about his time with Hannah, feeling that she was a vital piece of his life. Wayne tells Dexter that every day with Hannah was like Christmas, but now she just sees him as a killer. He then notes that she's right and that he has one more person to kill before jumping in front of an oncoming bus, covering Dexter in his blood.

Afterwards, Dexter theorizes that Wayne didn't care about whether or not the bodies were found and just wanted a few more days of sunshine and frosty swirls before he took his own life. 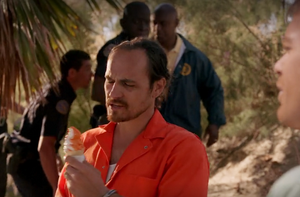 Wayne with his frosty swirl. 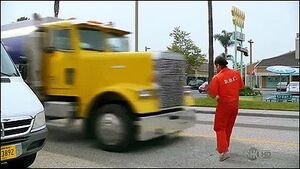 Moments before Wayne's demise.
Add a photo to this gallery

Retrieved from "https://villains.fandom.com/wiki/Wayne_Randall?oldid=4072942"
Community content is available under CC-BY-SA unless otherwise noted.