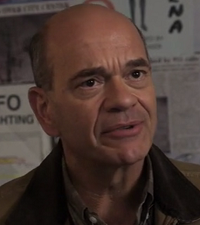 Wayne Whittaker is the main antagonist of the Supernatural episode "Clap Your Hands if You Believe". He is a leprechaun who posed as a UFO-specialist when away from his homeworld called Avalon. He's been pursing alien activities for over 30 years.

He was portrayed by Robert Picardo, who also played Shadowman and Sebastian Krueger in the Call of Duty: Black Ops story arc, Eddie Quist in The Howling, Sylvester Smirch in Beethoven's Christmas Adventure, Edward Teague in Smallville, Meg Mucklebones in Legend, Equinox EMH, The Doctor in Star Trek: Voyager and one of the pirates in The Pagemaster.

Wayne Whittaker, Jr. claims to be a UFO-specialist who's been pursuing alien activities over the last 30 years. He claims to have a great knowledge of aliens.

He is interviewed by Sam and Dean regarding the mysterious disappearances in Elwood, Indiana. Later, after Dean goes missing, Sam seeks Wayne out to determine what exactly he knows. Wayne hands over a pamphlet of his information, which Sam ridicules. He insults Wayne, telling him he "sucks at hunting UFO's."

Eventually, it is revealed that Wayne isn't in fact a human, but a leprechaun, one of the fairies, who's covering up the abductions committed by his kind by claiming it was the work of aliens. He was summoned to the town by the ignorant Mr. Brennan, who was unaware of the price he would have to pay in making a fairy deal, and the fact that fairies always "come to stay." In this episode, the price was the first-born sons of the whole town, starting with Brennan's own. At Sam's urging, Mr. Brennan attempts to undo the spell that summoned him, but the Leprechaun kills him for trying to go back on their deal.

He and Sam then engage in a fight, in which Wayne easily overpowers Sam. However, Sam manages to incapacitate him by spilling salt, forcing the fairy to count each grain. This gives Sam time to finish the counter-spell, which sends all the fairies away.