The Adventures of Ichabod and Mr. Toad: The Wind in the Willows

Large numbers
Skilled use of weaponry

To trick Mr. Toad out of Toad Hall (successful, later sabotaged)
To stop Mr. Toad and his friends from obtaining the deed (failed)

The Weasels are the secondary antagonists in The Wind in the Willows segment of the Disney animated picture: "The Adventures of Ichabod and Mr. Toad". They are a group of gangsters that are led by Mr. Winkie.

The Weasels are first seen driving by Mr. Toad in their red motorcar, catching Mr. Toad and his stead's attention. They follow them all the way back to their bar, and watched as one hopped out, walked to the door, and then signaled for the others to get out and walk inside. Mr. Toad walked into the tavern, catching the attention of the Weasels, and walked up to Mr. Winkie to ask him about purchasing the motorcar. He asked who the owner was, prompting the Weasels to duck under the table and point their guns in his direction. Winkie asked why, and Mr. Toad responded by telling him he would like to purchase it (lowering the Weasel's guard). Because Mr. Toad didn't have any money, he offered the deed to his home, which the Weasels reluctantly obliged to. They shook Mr. Toads hand, gave each other an evil wink, sat him down at a table and drew up a paper. Mr. Toad first signed the deed and Mr. Winkie signed it as a witness to the purchase.

Later, Mr. Toad ended up in court because the motorcar he was driving was claimed to have been stolen. After Mr. Toad told his story, Mr. Winkie came in and lied to the court, telling him that Mr. Toad had tried to sell him a stolen motorcar. This sent Mr. Toad to prison, and while he was, the Weasels and Mr. Winkie took over Toad Hall. Mr. Toad was later broken out and brought to his friends, who planned to steal Mr. Toad's home back by obtaining the deed.

As they approached the home, they ran into a Weasel guard, and were almost caught but escaped just in time. Before they had arrived, the Weasels had thrown Mr. Winkie a celebration party for helping them to obtain the home. They subjected themselves to a large amount of drinking at this party, and so when the group arrived at the home, they found all of the Weasels passed out drunk. They spotted Mr. Winkie with the deed, and devised a plan to get it off of his sleeping person. Once they obtained it, the guard from earlier emerged from the secret door, spotted the team, and threw a knife at them. This dropped the Mole with the paper onto Mr. Winkie. Winkie awoke and began demanding that the Weasels go after them. The Weasels all awoke and chased after them, throwing sharp weapons and bumping into them in an attempt to get the paper back. Mr. Toad ended up confusing them by throwing blank papers all over the room. Once Winkie spotted him, he commanded they throw all of their weapons in his direction. The chase continued, and in several instances Winkie and his Weasels almost killed Mr. Toad and his friends. They ended up escaping through the secret entrance they came through.

After obtaining the deed, they used it as evidence to send Mr. Winkie and this thugs to prison.

They appear to be to be standard Weasels with brown fur all over their bodies, white fur around their mouths, caps, undershirts, and vests. They don't appear to be wearing any pants.

The Weasels are thieving tricksters that aren't afraid to cross any bounds in order to get their way. They are very secretive, having to send out a scout to make sure it was safe for them to enter their own quarters. They are very quick to try and kill anyone they think to be problematic to their schemes, pulling guns out on Toad when thinking him to be an official and throwing a knife at the intruding Mole rather than alerting everyone else first.

The Weasels seem to love their drinking, having their base of operations set inside of a bar and drinking themselves to sleep after arriving in Toad Hall. They all seem to be very loyal to Mr. Winkie, letting him take the lead in their schemes, obeying what he says, and allowing him to slap them on the head in order to wake them up. 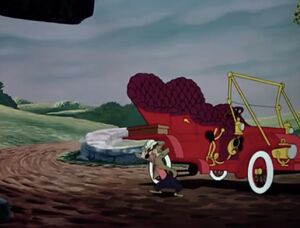 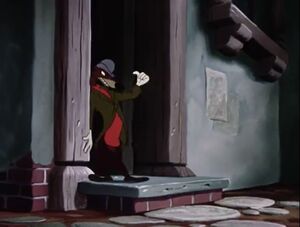 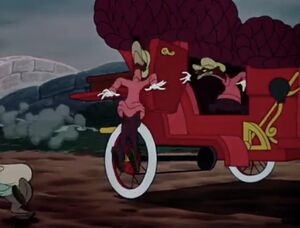 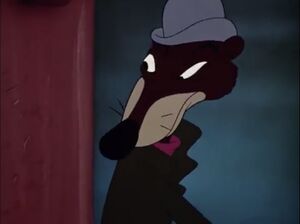 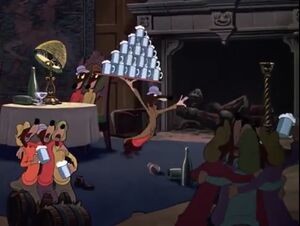 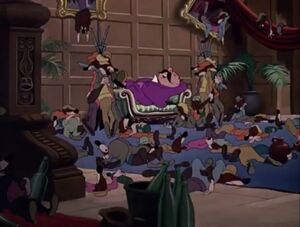 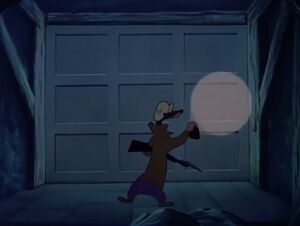 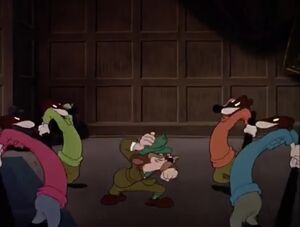