Villains Wiki
Register
Don't have an account?
Sign In
Advertisement
in: Spoilers, Outdated Articles, Doctor Who Villains,
and 34 more
English

Feed off their victims' temporal energy (in general).

The Weeping Angels are an ancient race that are described by the Doctor as "the deadliest, most powerful, most malevolent life-form evolution has ever produced" as they can sometimes kill without a thought. However, the Weeping Angels generally prefer to send a victim back in time before they were born to feed on the temporal energy that represents the life that person would have lived through. As a reflex defense mechanism, though it renders them unable to socialize with each other, the Weeping Angels revert to stone statues when looked at by another being, including themselves. For this reason, they are often seen as covering their eyes with their hands, giving the impression that they are weeping, when in fact, this is done to prevent them from looking at each other and turning to stone. Once their target's gaze is off them, the Weeping Angels can move upon them in less than seconds' time. Even the image of a Weeping Angel can take on a life of its own.

According to the audio drama Fallen Angels, three Weeping Angels were trapped inside Earth during it's formation, and were eventually discovered during the Renaissance inside marble blocks. Believing it was a miracle, a group of priests and believers formed the Order of the Three Angels, and commissioned Michelangelo to "release" the Angels. The Angels were defeated by the Fifth Doctor and locked under the catacombs of the Sistine Chapel.

The Side of the Angels

In their first appearance, a group of Weeping Angels in the abandoned Wester Drumlins mansion trapped the Tenth Doctor and his companion Martha Jones in the past and took his TARDIS to nourish on it's energy. However, via a time paradox, the Doctor enlists the aid of a woman named Sally Sparrow to sent the TARDIS back to him while tricking the Weeping Angels into looking at each other to freeze them indefinitely.

The Time of Angels

In the distant future, most of the Weeping Angels have occupied Alfava Metraxis but ended up in a state of suspended animation as they wiped out the native race prior to human settlers arriving. However, a Weeping Angel trapped in the vault of the ship Byzantium has the vessel crash into Alfava Metraxis to awaken its kind from their slumber. The Eleventh Doctor, accompanied by Amy Pond, manages to wipe out all the Weeping Angels by having them get sucked into a crack in time which erased them from existence.

The Weeping Angels took over 1938 New York City and made it into their feeding ground due to it's massive population. They transformed the majority of statues into themselves, including the Statue of Liberty. They would keep victims imprisoned in Winter Quay and send them back in time whenever they tried to escape. Crime lord Julius Grayle captured an Angel, and several baby Angels, keeping the adult manacled in his office, torturing and damaging it, and the babies locked in his dark cellar. In response to the captive adult Angel's distress, at least two other Weeping Angels watched over Grayle's home, disguised as ordinary statues. They eventually attacked when it was left defenceless.

The Eleventh Doctor, Amy, River and Rory Williams travelled to Winter Quay, where they were trapped by the Angels. However, Rory jumped from the Quay's roof, creating a time paradox (as an alternate timeline in which the Angels kept Rory imprisoned in Winter Quay until he died of old age already existed), which poisoned and killed the majority of the Angels. However, a surviving Angel in 2012 sent Rory back in time, and Amy chose to follow him, separating them from the Doctor forever.

Time of the Doctor

At an unknown point in time, the Weeping Angels travelled to Trenzalore along with many other races, such as the Daleks, the Cybermen, the Silence and the Sontarans, in response to a mysterious message broadcast through time and space. Unlike the other species, they managed to make it onto the planet, where they were discovered by the Eleventh Doctor and Clara Oswald. The Weeping Angels surrounded them, but the Doctor summoned the TARDIS to them and they escaped. During the Siege of Trenzalore, a Weeping Angel tried to invade the town but was trapped by the Doctor using a mirror on which he wrote "with love from the Doctor!".

Many Weeping Angels were recruited by the Division, to act as agents, being allowed free reign to be as sadistic as they liked as long as they achieved their goals. 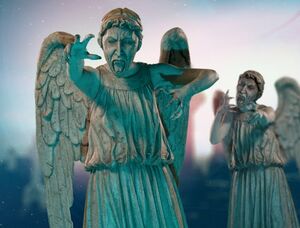 A pair of Angels on the attack. 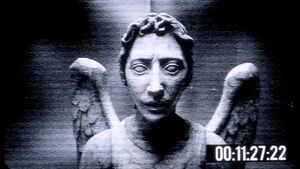 A recording of a Weeping Angel from the episode "The Time of Angels". 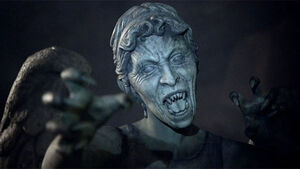 A Weeping Angel on the attack. 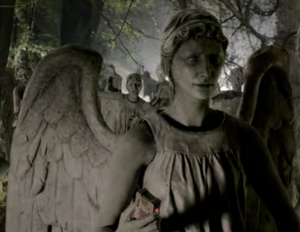 Angel Bob in Flesh and Stone. 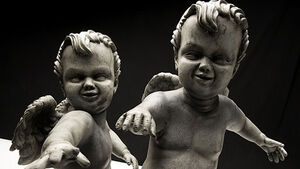 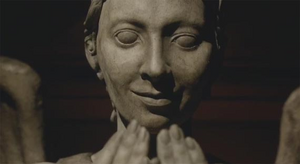 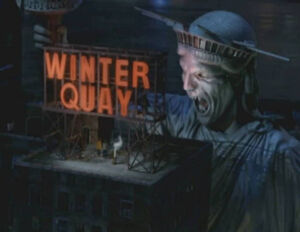 The Statue of Liberty, a giant Weeping Angel. 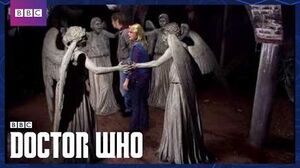 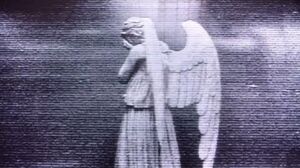