Shoot Fire, can spit living nuts bolts, can suck enemies like a vacuum

Weldar greatly resembles a giant living, but worn out and damaged blowtorch. His neck and head resemble a snake (that is flexible and strong enough to drag his body to the area for the boss battle), and he has poor eyesight (common trait for most species of snakes) due to looking at his own flame.

At the beginning of the boss battle it looks like it's going to be an easy boss because of his limited mobility. He attacks with fireballs, spitting out nuts & bolts, and able to jump rather high for something with "limited mobility." When he loses half of his hitpoints he activates his emergency electric field. This makes the boss battle more difficult. In order to inflict damage into Weldar, Banjo must shoot Fire Eggs, Gernade Eggs, or Clockwork Kazooie Eggs into Weldar mouth while he's trying to suck Banjo and Kazooie in like a vacuum.

After he losses all of his hitpoints, Weldar explodes, and at the same time destroys the high voltage box, which shut off a fan that has a Jiggy behind it. 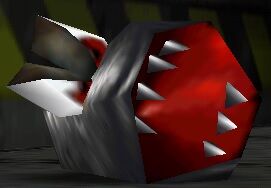 Weldar's defeat
Add a photo to this gallery

Retrieved from "https://villains.fandom.com/wiki/Weldar?oldid=3531243"
Community content is available under CC-BY-SA unless otherwise noted.