Criticizing details about restaurant, anything but the taste of food.

Humiliate those restaurants and chefs that didn't appease to his so-called standards.

Wen Ts'ai is a well-known Southeast Asian food critic who is prone to aggressiveness and elitism through his distaste over tasting food. He prides himself on being above such crass specifics as "texture" and "flavour". Instead, he applies himself to the experience as a whole and does not dirty his pallete with plebian things.

Most notably, during a restaurant visit in Shanghai, Wen Ts'ai livestreamed an extended diatribe triggered by his ur-glacial water being two degrees overchilled (as measured by his trademark IR thermometer), a public humilation which caused the restaurant's Singaporean chef to committ suicide.

The contract on Wen Ts'ai's assassination had been issued by the partner of the aforementioned Singaporean chef who committed suicide due to Ts'ai's critisism.

Wen Ts'ai is a caustic, petty, condescending and arrogant man, who shows distaste and scorn towards ordinary food critics and bloggers, having his own elitist style of standards and despised the ordinary.

Instead of tasing the food by himself, which was a key part for the food critics, Wen T'sai would callously criticized on other more trivial things, anything but food, such as decorations, tempreture, menu or even the chef and waiters themselves, in order to show his difference to those he believed to be mediocre.

However, sometimes he will break the rule if he saw certain food, like a cake prepared by Chef Bernard, similar to that prepared for Jordan Cross's birthday (which will give 47 a chance to eliminate him by poisoning the cake). 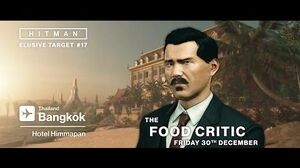