Wendell is the secondary antagonist of the 2004 live action comedy film, Garfield: The Movie. He is the personal assistant of Happy Chapman.

He was portrayed by Evan Arnold.

He is seen for the first time, giving pharmaceuticals to Chapman who is allergic to cats since he has to work for his TV show with one called Persnikitty. We can see him at the dog contest, which Jon goes with his new dog Odie. He is very surprised, like the judges, to see Odie dancing (as he learned with Garfield).

Wendell notices the flyer which mentions that Odie is missing. He goes, with Happy, get Odie who is at Mrs. Baker. In Happy's office when Wendell sees that Happy pulls out the electric collar for Odie, he contests saying that this inhuman. He accompanies Happy and Odie to the train station to take the New Amsterdam for New York. However, Garfield stops all trains that are leaving to save Odie.

Wendell then notices them running away and alerts Happy running to them. He's seen for the last time on TV running after the police car with Happy Chapman inside. It is unknown of what happened to him afterwards, but it is presumed he's also arrested for helping Happy to steal Odie from Jon.

He is sweeter and friendlier than Happy, but is forced to do everything for him unwillingly. He maybe worried himself to see Happy's arrest. 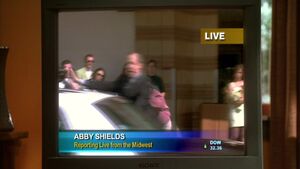 Wendell's defeat: Chasing a police car with Chapman in it.