Wendy Lin was a technician in the Chem Department, serving as one of the secondary antagonists in The Cabin in The Woods. She is responsible for chemically altering the five college students in order for them to better fit their roles.

She was portrayed by Amy Acker, who has previously played Winifred Burkle on Angel and Dr. Claire Saunders on Dollhouse.

In the beginning of the film, she informs Hadley and Sitterson that the Stockholm branch has failed. They inform her that the last time things went wrong in the American branch, it was fault of the Chem Department. She helps explain how things work in the Ritual to Daniel Truman, who is new to the facility.

After it is revealed that Marty Mikalski is still alive, she figures out that somehow it was his stash of marijuana that kept him immune to the drugs.

During the System Purge, she is taken away through the ceiling of the control room by The Kraken to her death. 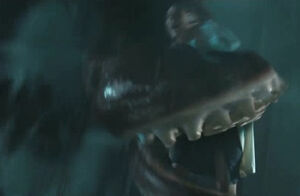 Wendy Lin's death.
Add a photo to this gallery
Retrieved from "https://villains.fandom.com/wiki/Wendy_Lin?oldid=3780721"
Community content is available under CC-BY-SA unless otherwise noted.