To reveal the secret documents of Ace Attorney 4 to the world, where Miles Edgeworth becomes the main protagonist and Phoenix Wright is deprived of his attorney status

Wendy Oldbag is a recurring mischievous character in Ace Attorney series. She appears as the real villain in non-canon theft case shown in advertisement of Apollo Justice (Ace Attorney 4) on Tokyo Game Show. She theft the secret Ace Attorney 4 files while working on Capcom as a security guard and then incriminated Mask*DeMasque IV, who in reality appeared to be the main protagonist of the fourth game - Apollo Justice.

Wendy Oldbag first appears as a security guard on Global Studio, where murder of Jack Hammer, her idol, occurs. When she was put on trial, she felt in love with the prosecutor of the case, Miles Edgeworth, and started stalking him to the point where he would become paranoid every time he sees her throughout the series. Two of those time were his Edgeworth's own game when he stuck in her while she was employed as an actress for the roles of symbolic Pink Badger and later Pink Princess from "Steel Samurai" show.

Ms. Oldbag was employed as a security guard by Capcom, who actually in charge of Ace Attorney series production. Using the opportunity, she looked through the secret files of the game in development - Ace Attorney 4, only to deduce from the concept-arts that the main protagonist would be her beloved Miles Edgeworth. She stole the files and put the blame on Mask*DeMasque IV, who was aimlessly walking in the company storage. To make sure everyone would be interested in the coming trial (as she acknowledged she will be revealed as the thief from previous encounter with Edgeworth and Wright), she made everything to repeat four times as for Ace Attorney 4.

Oldbag caused gamers in the line for the new Ace Attorney game to wait four hours, the sumo wrestler Tasogariyama to aim for four consecutive championships (all that was said on news by Maya Fey and Miles Edgeworth); the Mask*DeMasque the Fourth to cause four crimes that year (with the fourth being her own incrimination); she also caused the 4th degree earthquake and aim the Typhoon No. 4. She was then called to the trial as a witness for Mask De*Masque's theft.

During her testimony, she went on her quick endless speech like she often does, however, she let the truth about her crime slip during the chit-chatting, so Phoenix Wright was able to slow her speech down and point to her confession. Oldbag then revealed her plan and the fact that out of concept-arts, it becomes obvious that Miles Edgeworth was going to be the main protagonist, while Phoenix himself is deprived of his attorney status. However, Wright found the contradiction in Oldbag's claim, the age of the main character which was 22, while Edgeworth was already beyond that age. Oldbag then pointed that the main protagonist had been hidden in Capcom's storage. Deducing, it was possible to find out that Mask*DeMasque IV was, in fact, the main protagonist of Ace Attorney 4 - Apollo Justice, disguised as Mask*DeMasque in order for people to not learn his true identity. As he was the defendant for the case, he, most probably, got a "Not Guilty" verdict, while Oldbag, most probably, was fired from Capcom.

Video of the Case 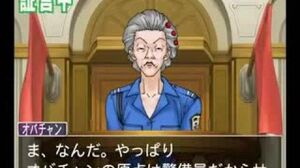 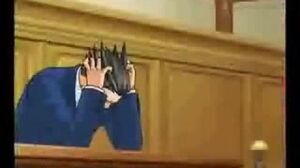