Transforming others into Were-Skunks (formerly).

Make Rigby become a Were-Skunk so that people won't insult only him (failed).

Were-Skunk is an one-shot antagonist in Regular Show. He serves as the main antagonist of the episode "Skunked".

He was voiced by Paul F. Tompkins.

He sprays Rigby, turning him into a Were-Skunk, as well as making him smell horrendous. He serves as the main antagonist in "Skunked". In the end, he turns back into a human after being hit by tomato paste which is the cure for becoming a Were-Skunk. He was originally a human being, but he then became infected by skunk stench and became an arrogant and brutal skunk creature with powerful strength.

Despite having a cabin as a house, he was sleeping on the road before, most likely because it is his preferred place to sleep on. After Mordecai and Rigby mistake him for roadkill, and he believes that Rigby was mugging him, he sprays Rigby, giving the racoon an awful stench and beginning his transformation into a were-skunk. Skunk also attacks Rigby after the latter insults him and calls him a jerk, but backs off when Mordecai threatens him with a shovel.

After his transformations caused by anger cause Rigby to; threaten and attack Mordecai (twice), insult and attack Skips, and threaten Eileen. The latter of which was the final straw for him, as Rigby locates Skunk's cabin and apologizes for calling him a jerk, pleading to tell him how to go back to normal. Skunk then reveals that he wants Rigby to be just like him to share his suffering and befriend him while being hated by other people. After being beaten, he lies to Rigby about pineapple juice being the cure to stall him so he would run out of time, with Rigby's transformation beginning to speed up.

Mordecai arrives at the house, but Skunk locks the door to prevent him from helping Rigby. However, Mordecai reveals that the true cure is tomato paste. Rigby and Skunk then engage in a brutal fight, where Skunk eventually gains the upper hand by hitting him and spraying Rigby repeatedly. Mordecai however, rams through the kitchen wall with the golf cart, destroying the kitchen and causing Skunk to tell Mordecai that he can't stop what will happen. Mordecai agrees with him but says that Rigby can, as he slides him the tomato paste.

After Rigby smashed open a can of tomato paste that splattered the entire kitchen, he and Rigby were reverted to normal, and he said "thank you" before dropping to the floor, though whether he died or fell unconscious is beyond anyone's guess. Nonetheless, Mordecai and Rigby still decided to count him as a skunk even though he's a half-human. 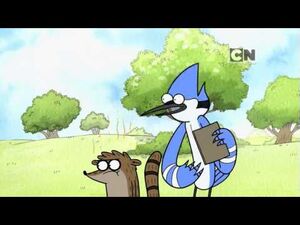