The Werecat Lady, also known as simply the Cat Lady, is a minor character in the Disney Park attraction The Haunted Mansion, which appears in Disneyland in California, Walt Disney World in Florida, and Tokyo Disneyland, as well as its alternate version Phantom Manor at Disneyland Paris. Despite doing nothing malicious in the actual attraction, the character serves as a minor antagonist in the Haunted Mansion miniseries of the 2016 comic book series Disney Kingdoms by Marvel Comics.

In the attraction, the Werecat Lady is one of the ghosts possessing one of the Changing Portraits. It shows her reclining on a couch in a white dress. Whenever lightning strikes, it illuminates the portrait, turning her into a snarling white tiger. In the original versions, she became a black panther.

Her possessed portrait also appears at Phantom Manor in the Portrait Corridor. Here, there is a gradual change from the original to her werecat form, this one a black panther like the original incarnations.

In the Disney Kingdoms comic, the Werecat Lady and the other Changing Portrait ghouls serve the evil Captain, who has trapped all the ghosts in the mansion and is working to get all of the ghosts to ally with him. She and the other Changing Portrait ghosts awaken when protagonist Danny Crowe arrives, and they all immediately try to kill him. They chase him through the mansion until they are scared off by Madame Leota. She presumably flees back into her portrait, leaving everyone alone until the Captain is destroyed.

The Werecat Lady makes a cameo appearance in the 2003 live action film based off the attraction. Here, she says and does nothing, but simply changes into an orange tiger as the protagonists walk past.

The Werecat Lady appears as a secret unlockable character in Disney Crossy Road, referred to simply as the "Cat Lady".

The Werecat Lady appears as a young, beautiful woman in a loose black dress with a small golden necklace. She wears two white flowers in her black hair. When transformed, she becomes a large, angry white tiger with large fangs.

In the original version, she wore a white dress and changed into a sleek black panther.

In the film, she appears sitting on a chair with orange and white robes on, and her hair done up. She changes into an orange and black Bengal tiger in this version. 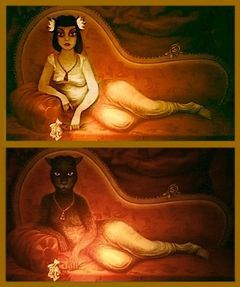 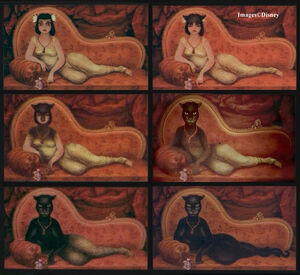 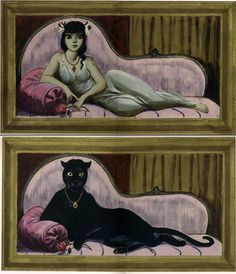 The Werecat Lady as she appears in the 2003 film.

The Cat Lady in Disney Crossy Road.
Add a photo to this gallery

Retrieved from "https://villains.fandom.com/wiki/Werecat_Lady?oldid=3779681"
Community content is available under CC-BY-SA unless otherwise noted.