Eating both rabbits and humans.

Attacking it's prey without mercy.

To continue attacking and eating both rabbits and humans.

Transforming its victims into lycanthropic assailants against their will

The Weremole is a legendary, animalistic mole-like creature and the titular main antagonist of the episode "Night of the Weremole" of Courage the Cowardly Dog.

Its vocal effects were provided by John R. Dilworth.

The Weremole, though nothing else known about him, is a vicious mole that might be the only creature being called or is the only one of its kind called "Weremoles", and it is simply on the prowl attacking it's prey which is simply both rabbits and humans.

In "Night of the Weremole", the Weremole came to the outskirts of the town of Nowhere, Kansas, and it killed and ate an innocent rabbit without warning ,letter biting  Muriel Bagge's hand while she was trying to feed the rabbit. Then she turned into a weremole because of the hand-biting. Eustace thinks there's mice in the house. Courage talks to the computer about how Muriel is a mole creature. Computer told Courage he has a weremole.

They come out in the full moon and they've got a taste for rabbits and people. And if you're bitten by a weremole you become one yourself. The cure to turn a cursed weremole back into a human is to get a little hair from the mole that bit you.

Courage goes outside in a rabbit costume and the weremole bites Courage. It shows that dogs are immune to turn into weremoles. Eustace Bagge tries to hit Muriel the weremole with his mallet, but keeps missing. Courage got out of his rabbit costume and the weremole continued to bite Courage's rabbit costume. Courage carefully got a piece of his hair. Later Courage dropped the hair in Muriel's mouth,resulting in Muriel beginning to choke and quickly went back to her old self. Dr. Vindaloo turned into a weremole after he got bitten by Muriel when she turned into one. Dr. Vindaloo grabs Eustace in his jaws and then proceeds to swallow him alive and whole. (How Eustace returns from this is anyone's guess.)

Wild and savage, the Weremole seeks only to feed on rabbits or humans in a gruesome tearing-and-shaking fashion. Once bitten by a weremole, the victim will mutate into one as well. They take on the hairy and violent characteristics of their attacker, as well as the inhumane nature. The only known cure is if they are fed a strand of hair from their infecting mole. However, this only works on humans and rabbits. When Courage was bitten by the weremole, he did not become one himself because he is a dog. The weremole's effects have been proven ineffective, therefore, Courage is impervious to this (although he still hates getting thrashed about). 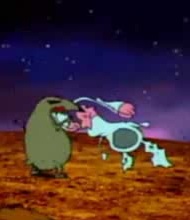 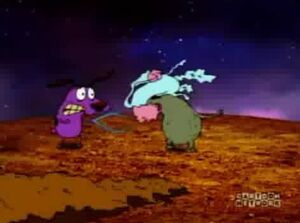 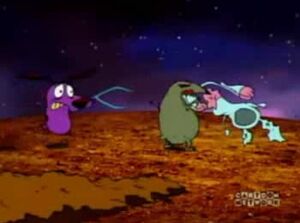 Retrieved from "https://villains.fandom.com/wiki/Weremole?oldid=3043355"
Community content is available under CC-BY-SA unless otherwise noted.