Feral werewolf at a casino.

The Werewolf is an antagonist in an alternate ending of Blade: Trinity as well as its novelization.

Now that all of the vampires are extinct from the Daystar virus, werewolf populations have skyrocketed in the next 6 months. One of them arrived at a casino in China's Shanghai province to blend in with the humans. Once the Nightstalkers arrived, they decided to hunt werewolves including the one inside the casino. The Werewolf scared away the people and presumably died at the hands of Hannibal King. 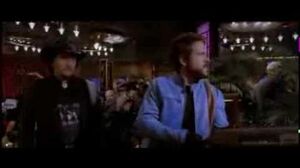