Kill everyone who would oppose them.

The Werewolf is one of the evil roles from the mystery RPG game Town of Salem. The Werewolf wants to kill everyone and survive until end of the game.

The Werewolf deals powerful attack, they can kill the roles with the basic and no defense, but not powerful and invincible defenses

The Werewolf must eliminate everyone (except Witch, Survivor, Guardian Angel, Executioner, Pirate) to win.

The Werewolf has a basic defense, they can not be killed by the roles with basic attack, such as Serial Killer, Godfather and Potion Master. 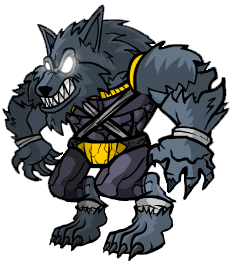 Avatar of the Werewolf.

Avatar of the Werewolf in the mobile.
Add a photo to this gallery

Retrieved from "https://villains.fandom.com/wiki/Werewolf_(Town_of_Salem)?oldid=3765256"
Community content is available under CC-BY-SA unless otherwise noted.