Lori Baxter is a regular character in Seasons Two and Three of Big Wolf on Campus, serving as the girlfriend of Tommy Dawkins in Season Two. Normally one of the main protagonists, Lori became a villainess in the two-part episode, "The Manchurian Werewolf".

She was played by Aimée Castle.

Part One of the episode had Tommy kidnapped by the Evil Werewolf Syndicate, who had been attempting to recruit him on multiple occasions. Tommy ends up hypnotized and instructed to create more werewolves, and Lori ends up being his unwilling victim when he attacks her during their date. Lori is later brought to the Syndicate, and she already begins her transformation, brandishing a set of fans and snarling continuously. Unlike Tommy, Lori becomes evil in her partial werewolf form, and when Tommy (who is freed from the Syndicate's control) and Merton attempt to rescue her, Lori fights Tommy, stating that she doesn't want to be saved.

In Part Two, Lori's lycanthropic urges increase, and she is eager to "put her new fangs to work," as she put it. Tommy and Merton escape from eing imprisoned and again attempt to rescue Lori, who again stated that she preferred to remain with the Syndicate. The plan goes wrong when the duo end up taking the leader instead of Lori, which leads to both sides agreeing to a trade:  the leader for Lori. Lori refuses, knowing that she'll be injected with wolfsbane and cured if the swap happens. Lori even reveals her plan to take over as the new leader of the Syndicate, and goes after Merton inside his lab. After being confronted by Tommy, Lori gets away with the leader. Her transformation increasing, and with just minutes left until midnight (when she will become a werewolf for good), Lori decides to fight against the leader for control of the Syndicate, which she wins. Now serving as the new leader, Lori engages in another fight with Tommy, which ends with Merton shooting a dart filled with wolfsbane antibodies into Lori, curing her in just the nick of time. 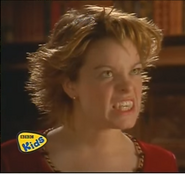 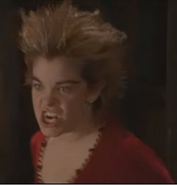