Road Rovers: A Hair of the Dog That Bit You

Roam undisturbed and convert victims to increase their pack.

Transforming people into werewolves against their will

The Werewolves are the antagonists in the episode "A Hair of the Dog That Bit You" of Road Rovers.

Werewolves were roaming at night in London, and the Rovers were sent there to fight them off, with Exile and Colleen ending up with scratches all over them. Back at the lab, Shag is up getting a midnight snack when he encounters a werewolf. The werewolf chases after Shag and later Blitz, and they warn Hunter and Exile about the werewolf sightings, all while waking up Colleen.

After leaving Exile's room, Exile sees claw marks all over the door, leaving himself with the fear that he is the werewolf.

After getting a cure from Confucius (the cure being swamp water), the Rovers headed back to London on separate copters, with Exile chained up and flying with Hunter and Shag, while Colleen flew with Blitz. With the full moon rising, Exile stated that he felt "hot, sweaty, and large," but that's normal for him.

Exile was cleared of being a werewolf, but in Blitz's chopper, Colleen turned heel and was revealed as the werewolf. She transformed into a werewolf much to Blitz's horror, and after her transformation, the evil Werewolf Colleen attempted to attack Blitz. The choppers landed in Stonehenge, where Colleen left to join the other werewolves in attendance. With the sun rising, the rest of the Rovers had to save Colleen and the other werewolves before they are forever in their werewolf forms.

While battling against the beasts, Hunter dipped a tennis ball dipped in swamp water, turning Colleen back to normal. The same was done to the other werewolves, who reverted back to human form. 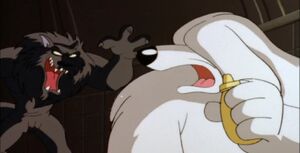 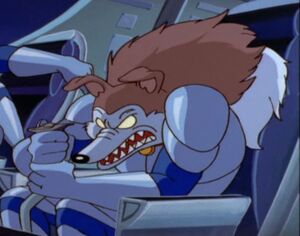 Colleen's heel turn and reveal as the villainous werewolf 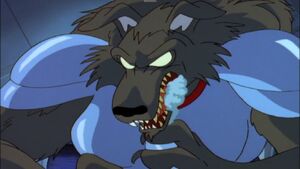 Colleen as a werewolf. 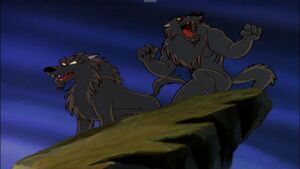 The werewolves at Stonehenge.
Community content is available under CC-BY-SA unless otherwise noted.
Advertisement