Could be various but primarily from Earth

Eating everything they can.

Werewolves are monsters of folklore and they are one of the most well-known folkloric creatures of all time, arguably only rivalled by the vampire in popularity and recognition.

The werewolf has been seen in countless cultures around the world and is almost always considered vicious, antagonistic and evil. In many ways, the werewolf may represent the fear humans have of their own animalistic urges, though other theories suggest the legends of werewolves were caused by interactions with people suffering from serious mental health problems, rabies or deformities.

No matter the origin of the tales werewolves have become a staple of fantasy and horror fiction with many characters becoming werewolves, with the Wolf-Man is one of the more prominent examples of this.

Although Hollywood has popularised the concept of werewolves transforming by the light of the full moon this wasn't a fixed rule in the folklore, in the legends werewolves came in three kinds: the cursed human, the evil sorcerer and the wolf that would disguise itself as a man (many cultures had a fear of wolves and viewed them as demons, though other cultures revered them).

In Native American folklore, evil shape-shifters known as Skinwalkers sometimes took on the role of werewolves and were seen as men and women who would, via black magic, transform into animals by night and attack villages, at the same time some shamans would try to invoke wolf-spirits via rituals. However, the werewolf is not related to the Wendigo, despite some modern tales mixing the two.

In medieval Europe, superstition ran rampant and as a result. many men and women were persecuted by people that believed they were werewolves. Much like during witch trials, the persecuted would be accused of killing children, vandalising property or worse, and were often subjected to torture and death. Not surprisingly, many outlaws at that time went into hiding to avoid unjust accusations.

The Pricolici (same form in plural) is a werewolf also and a vampire in Romanian folklore. Similar to a vârcolac, although the latter sometimes symbolizes a goblin, whereas the pricolici always has wolf-like characteristics.

Pricolici, like Strigoi, are undead souls that have risen from the grave to harm living people. While a strigoi possesses anthropomorphic qualities similar to the ones it had before death, a pricolici always resembles a wolf or large dog. Malicious, violent men are often said to become pricolici after death, in order to continue harming other humans.

Some Romanian folklore delineates that Pricolici are werewolves in life and after they die, return as vampires. This also gives rise to the legend of vampires can turn into animals such as wolves, cats, or owls and (rarely) bats. The common theme of all these animals being that they are nocturnal hunters much like vampires.

Even as recently as modern times, many people living in rural areas of Romania have claimed to have been viciously attacked by abnormally large and fierce wolves. Apparently, these wolves attack silently, unexpectedly and only solitary targets. Victims of such attacks often claim that their aggressor wasn't an ordinary wolf, but a pricolici who has come back to life to continue wreaking havoc.

The Varcolac The true origins of this creature have been debated through out Romanian folklore. Some aren't entirely sure what kind of creature it is. Some believe it is some form of vampire, some believe its a rare breed of werewolf, and others believe it is the unnatural hybrid between the two. Regardless of what type of creature it is, it shares many similarities of both. It takes the appearance of a wolf and comes out during certain phases of the moon. The moon has been said turn a red shade when the Varcolac is on the hunt. This creature rises from an unmarked grave, attacks nearby villages and drains its victims of their blood. The best way to kill this creature is to feed it its own flesh which is said to be incredibly toxic.

The Vrykolakas area harmful, undead creatures in Greek folklore and in Salento, the Greeks traditionally believed that a person could become a vrykolakas after death due to a sacrilegious way of life, an excommunication, a burial in unconsecrated ground, or eating the meat of a sheep which had been wounded by a wolf or a werewolf. Some believed that a werewolf itself could become a powerful vampire after being killed, and would retain the wolf-like fangs, hairy palms, and glowing eyes it formerly possessed.

The Jé-Rouges are said to be evil vampire-werewolf from Haiti, there is a superstition that werewolf spirits known locally as Jé-rouge (red eyes) can possess the bodies of unwitting persons and nightly transform them into cannibalistic lupine creatures that take babies from houses (drinking their blood, eating them and taking their soul), and voodoo related. The Haitian jé-rouges typically try to trick mothers into giving away their children voluntarily by waking them at night and asking their permission to take their child, to which the disoriented mother may either reply yes or no. The Haitian jé-rouges differ from traditional European werewolves by their habit of actively trying to spread their lycanthropic condition to others.

The Farkasköldus is a rare species from Hungary. It is about a lycanthrope turned vampire. Farkasköldus has other unheard-of properties. Normally appears in the form of a huge black wolf but can change form at will, transforming into a cat, dog or goat, and thus infiltrate rural villages without arousing suspicion.

Despite his powers, the Farkasköldus is a discreet, sneaky creature that carefully selects its victims before attacking; almost always elderly or sick people, perhaps believing that closeness to natural death makes them more docile prey. Once it chooses its victim, the Farkasköldus drinks his blood through numerous incisions and piercings made with its claws and teeth. The operation is still a risk for him, since after being satisfied, his body swells terribly, making his return to the grave before sunrise demand a supreme effort.

The Aswang is a vampire-werewolf who transforms from a human to a canine form at night, and eats human flesh in Philippines. Aswangs commonly dwell at night in locations such as cemeteries and woods, as their powers are significantly, or sometimes totally, reduced during the daytime. However, despite being described as wild monsters that often live in the wilderness and outskirts of society, aswangs are also described as creatures that are capable of living within close proximity of or even within the confines of a village, leading to several reports of aswang attacks within large, populated towns and cities. Their ability to adapt and live within the urban and rural environments populated by humans while still maintaining their feral, monstrous nature is cited as a feature that distinguishes aswangs from most other monsters.

The Bruxsa or Cucubuth is a vampire-werewolf that consumes both flesh and blood in Portugal. Before becoming undead vampire Bruxa start out as witches once they become a vampire the Bruxa have a craving for blood mostly the blood children and people who travel alone.

The Wurdalak is a werewolf that died and became a vampire in Serbia.

The Volkodlak is a vampire from Slovenia who has the unique power to transform into a werewolf. It arises from the union between a vampire and a lycanthrope, the most common form.

This Russian vampire revenant is created when a heretic, sorcerer, werewolf or witch dies or as the child of a werewolf and a witch.

The Qutrub is a creature from Middle Eastern folklore likened to an Arabian version of 'werewolf', but it is also depicted to be similar to a ghoul because it was said to haunt graveyards and eat corpses.

A depiction of a werewolf from a German woodcut in 1722 A.D. 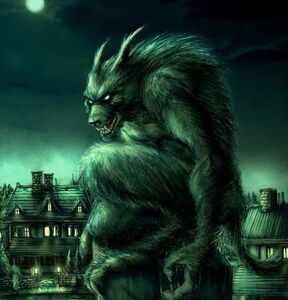 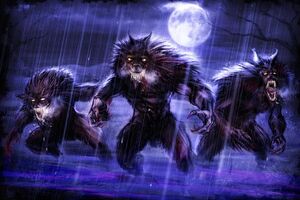 A trio of Werewolves.
Add a photo to this gallery

Retrieved from "https://villains.fandom.com/wiki/Werewolves_(folklore)?oldid=4217265"
Community content is available under CC-BY-SA unless otherwise noted.