Skilled use of weaponry

Hanging out with Wander

Westley (or Private Westley as he was known between the rest of Watchdogs) is an antagonist in Wander Over Yonder. He was a loyal soldier of Lord Hater's army up until was redeemed by Wander and Sylvia.

Like the rest of Watchdogs, Westley wears black uniform with red gloves and boots, a black cap with a small lightning bolt on top and an eyeball for a head with a red iris. However, he is shorter and chubbier than his companions and has stubbier arms and legs. He ends changing his cap from one with a lightning bolt to one with a star on top, which was given to him by Wander.

As the youngest and most energetic of Watchdogs, Westley is both a loyal soldier and strong supporter of Hater Empire and also is shown to be a bit of a daydreamer but determined to do his best because his short stature and weight tend to make him lag behind his companies as he lacks the same physical strength and is often clumsy. During his adventures with Wander and Sylvia, Westley constantly accuses them of being the "real bad guys" and refuses to trust them (as influenced by Lord Hater and his Watchdogs). As the travel continues, Westley slowly begins to soften up to the two heroes until finally laying down his laser pistol. However, when Lord Hater's ship arrives, and Lord Hater himself alongside Peepers stand outside waiting for the young watchdog, Westley turns against Wander and Sylvia and turns them in. However, Westley later plays a trick in helping his two new friends to escape Hater's ship and appearing to die in a fake attempt to stop them.

But, at the end, Westley is seen alive, throwing away his laser gun and given his new hat by Wander and Sylvia. 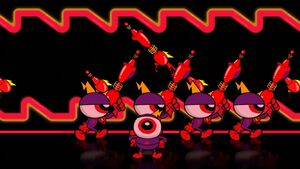