The Westway Refrigerated Truck is a 1992 silver colored White Western Star 4964 truck with a black guardrail at the front and a refrigeration trailer. When ever the truck revs, its diesel engine makes a sound that makes it sound very evil and powerful. It hauls a refrigerated trailer with a logo that says, "Guaranteed Cool!" WESTWAY REFRIGERATED. The logo features a polar bear and it is found on the cab of the truck and both sides of the trailer. Inside the trailer are frozen meats that are kept cold and frozen until reach to its assigned destination.

The Westway Refrigerated Truck first appears when it was preparing to leave a truck stop after the driver came back from the workshop. After leaving the truck stop, the truck travels along a country road when it soon starts acting strange. The driver tries to control the swerving rig but soon stops and gets out to take a look. He looks under the rig and the trailer and opens the refrigerated trailer to investigate. The door of the trailer closes and the driver gets trapped in the cold trailer. A group of travelers spot the truck and think the driver has left but one of them felt suspicious. The refrigerated truck starts up and drives to Phil's junkyard where the humans are try to move an old 1954 Dodge W-200 off the main road. The truck charges at the humans but smashes the 1954 Dodge on to the side and storms through the junkyard. As the truck rounds the corner, a woman named Hope attempts to get back into her SUV but a male traveler, Thad pulls her away and the rampaging truck smashes the SUV and drives off. The truck arrives at the truck stop and almost killed the Yeagers who are heading inside of one of the cabins to have a good time. As the humans race to the truck stop to get away from an aggressive Ford cherry picker truck, two more trucks come to life and join in with the refrigerated truck. The humans are now held hostage by a caravan of driver-less trucks and escaping sound impossible.

At night, the trucks demanded fuel and the hostages decided to obey the trucks' orders. After refueling the trucks, the humans make their escape to the woods but the blue dump truck charges at a waiter named, Georgie but gets shot and almost crashes. The Refrigerated Truck stops and after noticing what Georgie has done, it grew very aggressive. Revving its mighty diesel engine, the angry truck leaves its refrigeration trailer and charges aggressively at Georgie. Georgie fires on the truck's grill and soon gets killed as the truck crashes into the diner. The truck soon becomes stuck and Ray grabs a shotgun from the crashed dump truck and fires at the diner causing it to explode and ending the refrigerated truck with it. The remaining survivors flee into the woods and spend the night there.

The next morning, the survivors reach the gravel pits where a helicopter is searching for survivors. The humans signal the flying aircraft and wait for it to come down. They look to their left and spot the now damaged refrigerated truck which has survived the explosion. The truck aggressively blares its horn and blows exhaust from its broken exhaust stack as it spots the humans. The survivors rush to the helicopter as the angry truck charges at them to get a last shot of killing them. The helicopter touches down and the humans scramble to get on. The aircraft pulls up as the truck misses them and crashes into a pond. The survivors are flown to safety after their harrowing ordeal is finally over. 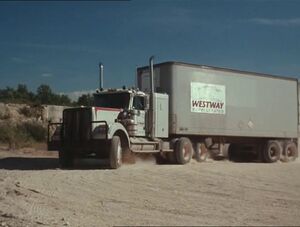 The Westway Refrigerated Truck prepares to ram the Yeager's car. 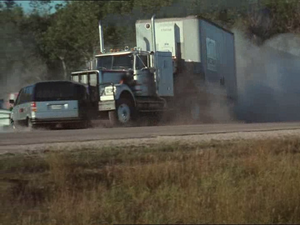 The truck rams into the SUV as it exits the junkyard. 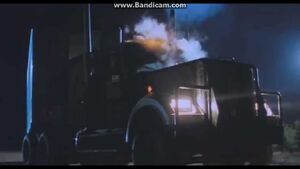 The Refrigerated Truck revving its engine aggressively before leaving its trailer. 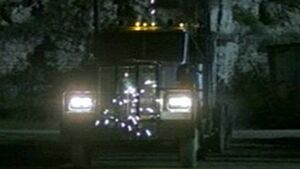 The angry truck charges for Georgie as he fires on its grill. 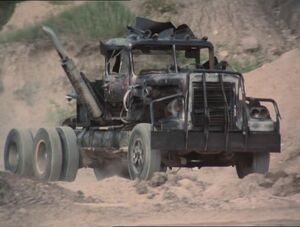 The damaged truck charges towards the survivors as the helicopter approaches. 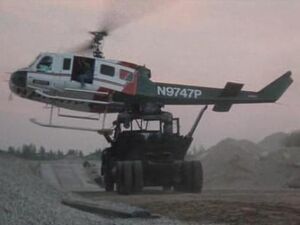 The truck misses the helicopter as it pulls up.
Add a photo to this gallery

Retrieved from "https://villains.fandom.com/wiki/Westway_Refrigerated_Truck?oldid=3626754"
Community content is available under CC-BY-SA unless otherwise noted.