Possesses nearly limitless amount of financial assets and profits which enabled the corporation to revive (events after Alien: Resurrection) after its first collapse in 2352 A.D

Make profits out of anything to both ensure mankind to be the elite race in the universe itself.

Create a better world for the humanity.

The Weyland-Yutani Corporation, also known as Weyland-Yutani or Wey-Yu, is a British/Japanese multinational conglomerate, playing pivotal roles in the Alien movies and is often referred to as "The Company". It is one of the corporations that runs the human colonies outside the solar system through the Extrasolar Colonization Administration, has a seat in the Interstellar Commerce Commission's Company Review Board, and also has a large presence on Earth. They hold their main offices in Tokyo, San Francisco, the Sea of Tranquility, and Thedeus.

Weyland-Yutani is consistently portrayed as exhibiting the worst aspects of corporate profiteering, willing to sacrifice decency and human life in seemingly the pursuit of profit. In various portrayals of the Aliens universe, the corporation has its hands in all aspects of space colonization and research. The corporation has consistently ordered its employees and agents to attempt to obtain living Xenomorphs so that they can be exploited as a biological weapon, without regard for their obtainers' lives, or the fact that the creatures are nigh-uncontrollable, resulting in repeated disasters for the business. In Aliens vs Predator (2010 video game), it is revealed in an audio diary from Karl Bishop Weyland that Weyland-Yutani's primary purpose behind capturing the Xenomorphs using any and all means at their disposal is to exploit them and create weapons out of their biology so they can ensure humanity is the elite species in the universe, and not so much because of profit.

Weyland-Yutani is a modern example of the longstanding trope of the evil megacorporation in science fiction.

Weyland-Yutani established initial human contact with the Xenomorph species on Acheron LV-426 (although it has been alluded to in the film as well as in others like the AVP series that there may have been contact established sometime before) and later established the Hadley's Hope settlement there. (Alien, Aliens )

Weyland-Yutani apparently had its antecedents in two 21st century companies: the Weyland Industries and another company known as the Yutani Corporation linked to a Ms. Yutani. (Alien vs. Predator, Aliens vs. Predator: Requiem) The 2 companies finally merged in the year 2030, after buying out Borgia Industries and obtaining the rights to their "Prometheus" weaponry, which was in reality stolen Yautja technology.

In Alien vs. Predator, the founder of Weyland Industries is shown to be Charles Bishop Weyland. He is portrayed by Lance Henriksen, the actor who played the android Bishop in Aliens and Alien³. In Alien³, Bishop II says the android Bishop was modeled after him. In the novelization of Alien³ (released before Alien vs. Predator), it is said that the Bishop android was created by a Weyland-Yutani employee named Michael Bishop. In the finale of Aliens vs. Predator: Requiem, the man who called himself Colonel Stevens meets with a woman named Ms. Yutani, offering her a Predator gun recovered from the survivors of the explosion in Gunnison, Colorado.

"Weylan-Yutani" (note the lack of a D) was the original name of the Weyland-Yutani corporation, created by Ron Cobb, one of the designers of the Nostromo and its crew's uniforms for Alien. This was changed to "Weyland-Yutani" in Aliens.

When film director James Cameron was assigned to write and direct the sequel, the role and significance of Weyland-Yutani increased greatly, becoming an indispensable element in Alien lore. The original Weyland-Yutani logo was an Egyptian winged-sun emblem; it was modified to its current corporo-industrial interlocked W/Y for Aliens. It can be viewed in various places, most prominently on the front of a big-wheel tricycle in a scene from the director's cut.

In Alien³, Weyland-Yutani's name appears on screen several times written in Japanese. It appears once on a box of supplies as ウェイランド湯谷. The first six Kana of this are part of the Japanese syllabary Kakatakana which is used to spell foreign words, and here they spell weirando (Weyland). The second part is the Japanese name Yutani written with two kanji, which literally means "hot-water valley" in English. The corporation's name also appears in a newspaper headline where the last four kanji read Kabushiki kaisha which means "joint stock corporation," and the company logo can be seen stenciled across the shirts, prison jackets and caps worn by various characters in the film, including Ripley.

In the Special Edition release of Alien Resurrection, the character of Dr. Wren (portrayed by J.E. Freeman) states Weyland-Yutani had been bought out by Wal-Mart decades before the start of the film. Consequently an interstellar military force called "United Systems Military" now controls all the weapons and R&D interests previously held by Weyland-Yutani. Some believe that Dr. Wren was lying to Ripley about the "Walmart buyout" in order to keep her compliant considering the ramifications of such information. This would suggest that the USM is simply just another branch of Weyland Yutani at the time.

In the Alien prequel Prometheus, the successor to founder Charles Weyland was shown to be Peter Weyland, his son, who at the time of the film is an old man looking to find immortality from mankind's creators The Engineers. After having found a living Engineer, however, Weyland was killed. As revealed in the film, however, Peter Weyland had a living daughter, Meredith Vickers, whom he had disowned due to his desire for a son. Vickers too perished further on, leaving no living descendants of the Weyland family. As such, all future CEOs were henceforth androids similar to Bishop units programmed to run the company. Two such known android CEOs were Karl Bishop Weyland and Michael Bishop.

The Bio-Weapons Division was a special department of the Weyland-Yutani corporation which dealt with the research and development of biological and viral weapons. One of their primary goals was to obtain a Facehugger, mature Xenomorph, or a Chestburster (which were preferred in some cases because they were easier to sneak past quarantine within their hosts). Their attempts to get one frequently involved lying or putting lives at risk just for their goals. Ellen Ripley would inevitably become a threat to this division after foiling every single one of the attempts to acquire a Xenomorph. The work of this division was still carried out by the United Systems Military after the corporation's demise, and would later fall foul of Ripley 8, a clone of the original Ellen Ripley.

The Reverse-Engineering division was developed after such incidents as the destruction of Gunnison County and the buy-out of Borgia Industries. Weyland-Yutani would capture alien tech and attempt to reverse engineer it. They would steal tech such as Predator weapons and Space Jockey technology. However, they would run afoul of the Predators, who were fiercely protective of their technology.

Other Divisions and Relationship to the United States Colonial Marine Corps.

Weyland-Yutani held other divisions of interests devoted to such areas as media, revealed in the menus for the Alien Collector's Edition sets. In Aliens vs. Predator (2010), antagonist Karl Bishop Weyland alluded to that the corporation may have played a massive part in the actual forming of the United States Colonial Marine Corps. Weyland proceeds to remind the protagonist, The Rookie, that Weyland-Yutani makes the Corps.' weapons (the WY logo is shown on Rookie's pistol) and states that him and the Corps. 'are old friends.' He continues on saying that he 'basically owns the Corps.' and refers to it as a 'corporate asset'. The revelation of Weyland-Yutani's possible ownership of the Colonial Marine Corps. can be hinted back at the end of Alien 3 where a Conestoga-class battleship carrying the rescue team sent to retrieve Lt. Ripley can be spotted above Fiorina 161. The rescue team is then seen with a couple of heavily-suited men carrying Pulse Rifles; it can be suggested that those particular men were indeed Colonial Marines. This can go back further to James Cameron's Aliens in which the character Burke accompanied the Marines on their mission to Hadley's Hope to which Cameron clarified that this was meant to invoke the conspiracy of America's involvement in Vietnam being for purely corporate interests. Additionally, it was revealed in Aliens that Weyland-Yutani co-financed Hadley's Hope with the Colonial Administration (a group which seems to be involved in all Colonial activities and, thus, the Colonial Marines), which may imply that there was some sort of connection between the two groups. If Weyland-Yutani doesn't have actual ownership of the Corps. itself, the company at least owns stock and/or finances it (allowing them to basically make the Corps. available for their own personal use) as Karl Bishop Weyland had clarified that they did indeed make their weaponry. 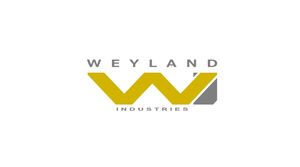 Weyland Industries before its merging with Yutani conglomerate. 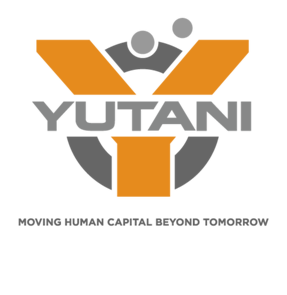 Yutani conglomerate before its merging with Weyland Industries.