Lieutenant of the Humungus' Marauders

Take the oil and rule over the wasteland.

Wez is the secondary antagonist of the 1981 film Mad Max 2: The Road Warrior, taking place in a world ruled by gangs.

He was portrayed by Vernon Wells, who also portrayed Ransik in Power Rangers Time Force and Bennett in Commando.

Wez is first encountered during the opening chase of the film. He and several other marauders pursue Max. Max manages to avoid their attacks, resulting in Wez being hit by friendly fire. However, he is unfazed, as he merely pulls the arrow out of his arm, holsters it, and rides away.

Wez is later seen harassing the population of an oil Refinery, attempting to enter.

After his companion Golden Youth, is killed by the feral kid, Wez becomes even more enraged and determined to capture the refinery, to the point where Humungus has to restrain him with chains.

He is turned loose during the marauder's pursuit of the tanker truck, driven by Max. He eventually climbs onto the hood of the truck, only to be killed when Humungus rams the tanker head-on.

Wez is a mohawked, leather-clad biker who serves as Lord Humungus' lieutenant in the gang, leading groups of the warrior-bikers in several battles. He is considered the most evil of Humungus' followers and is a psychotic brute who is cruel and the main henchman of Humungus, reactive and unrelenting in his pursuit of prey. 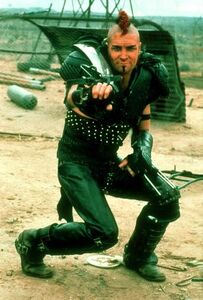 Wez with his crossbow. 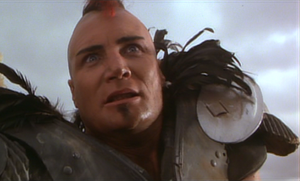 Wez dies when Max crashes his lorry into another vehicle, crushing Wez.
Add a photo to this gallery

Retrieved from "https://villains.fandom.com/wiki/Wez?oldid=3950502"
Community content is available under CC-BY-SA unless otherwise noted.