Complete control of the facility (only after replacing GLaDOS)

Berating anyone who calls him a moron.

Take over Aperture Laboratories (succeeded).
Have all testing chambers completed (briefly succeeded, but later failed).
Retain control of the facility.
Kill Chell and GLaDOS (both failed).

The Intelligence Dampening Sphere, better known as Wheatley, is the main antagonist of the 2011 video game Portal 2, as well as the secondary antagonist of the overall Portal franchise. He is an Intelligence Dampening Sphere, and as a result, was designed to be as dumb as possible as a way of getting GLaDOS to behave. He is also the second archenemy of Chell, although he starts out as her partner and friend.

He was voiced by Stephen Merchant, who also played Darren Lamb in Extras, Stuart Pritchard in Hello Ladies, Paris in Gnomeo and Juliet and Sherlock Gnomes, and Captain Deertz in Jojo Rabbit.

At the beginning of the game, Wheatley awakens Chell, who has been in stasis for several years, and tries to help her escape the Aperture Science facility, but is supposedly destroyed by GLaDOS when she is accidentally reactivated. However, he appears in hidden areas of the facility to Chell, and later helps her defeat GLaDOS by replacing her program in the main control system with himself.

But right when Wheatley is about to let Chell go free, he becomes corrupted and betrays her, accusing her of selfishly using him. This partially comes as a result of trying to give himself credit for overthrowing GLaDOS, only for GLaDOS to say that he had done nothing to accomplish this (even though he had actually pulled off some schemes and deals behind the scenes to make it possible) and give Chell credit for doing all of the work. In anger, he traps GLaDOS in a potato battery, and she recognizes his voice as a program the scientists once installed into her that gave her terrible ideas in an attempt to slow down her rise to power, calling him a moron. Infuriated, Wheatley breaks the escape platform and throws them both into an extremely deep shaft leading to the lowest areas of the facility. As they fall, GLaDOS explains that Wheatley was designed by the scientists to always come up with bad ideas (in her own words, to be a "moron").

When Chell makes her way back to the main facility with GLaDOS, Wheatley has redesigned all the test chambers in his own image, combining the turrets and companion cubes into one and even changing the logo on the loading screen to "Wheatley Laboratories". However, as he is designed to make bad decisions, he has neglected to maintain the lab's failing systems, putting the facility at risk of a nuclear meltdown. When they encounter him on a screen, GLaDOS tries to stump Wheatley by saying a paradoxical statement ("This sentence is false"), but Wheatley ignores the error and goes with "true". Eventually, they reach the main chamber again, where Wheatley states the facility is about to explode and he has been studying the final boss fight from the first game and has changed all the things that allowed GLaDOS to be defeated then, such as no usable portal surfaces and the immediate activation of deadly neurotoxin. Despite this, Chell is still able to corrupt and replace his personality cores. She is about to press a button that will replace his program with GLaDOS when Wheatley reveals that he had booby-trapped the button and it explodes, injuring Chell. The facility is about to explode, causing panels to malfunction and disappear, like one which reveals the Moon in the sky. Chell shoots a portal up to the Moon which sucks everything onto its surface, including herself. Wheatley gets detached from the body and turns normal again, and tries to pull Chell back in. GLaDOS takes over again and knocks Wheatley away and then she pulls Chell back inside.

After the credits, Wheatley is seen floating in space along with one of his personality cores, who is obsessed with space, where he laments his fate and says that he feels genuinely sorry for betraying Chell and wishing to have the chance to apologize to her.

Wheatley returns in the Portal 2 campaign as the deuteragonist. He first appears when he somehow spawns through a blue portal in a test chamber. He is also fitted with antigravity, making him able to fly around as he pleases. He claims to want to help Chell escape again, even though he obviously plans on taking over the facility. Though she doesn't speak, it is even clear that Chell is suspicious of his motives at first. He seems to be much more antagonistic this time around, making arrogant comments and openly taunting GLaDOS. He does act remorseful for what he's done previously. Instead, he goes on about how glad he is to be working together with Chell again.

Eventually, Chell and Wheatley fall into the depths of the facility when an elevator breaks. Wheatley attempts to use his antigravity to save himself, but it isn't enough. Chell doesn't catch Wheatley (much like the first game), and Wheatley sarcastically thanks her.

When Wheatley realizes they are in old Aperture, he panics, stating that it is full of vicious birds. Wheatley later apologizes for trying to bump Chell off when the elevator broke to save his own skin, and asks if they can be "BFFs".

After some testing, they discover an elevator that Wheatley realizes he can power, much to his excitement. However, after failed attempts at plugging himself in, Chell slams him into the port, and the elevator goes up. They eventually confront a cheerful GLaDOS in her chamber. When GLaDOS reveals that the Space Core also showed up, Wheatley has a minor rant about how annoying he is which, ironically, is annoying enough for Chell to punch him. GLaDOS then starts pumping neurotoxin into the room.

Wheatley suggests that they repeat the old core transfer procedure by damaging GLaDOS and inserting the Space Core into her body. He's very satisfied when Chell manages to beat the other AI. Chell and Wheatley quickly put Space Core in charge of the facility, and the neurotoxin emitters are disabled. Afterwards, the duo enters a hidden room with a blue portal that takes them back to the hub world, thereby ending the campaign.

Wheatley appears in Team Fortress 2 as the Ap-Sap sapper for the Spy. He functions identically to the regular sapper. 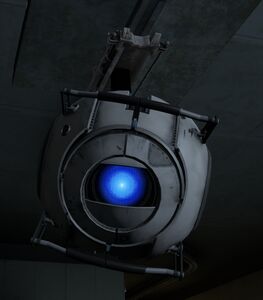 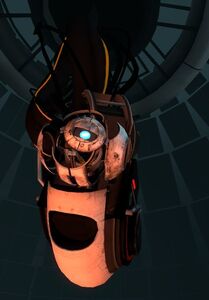 Wheatley rising to power after replacing GLaDOS as Central A.I. 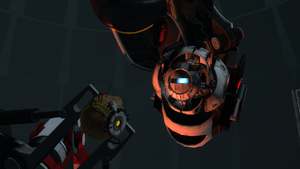 Wheatley turning GLaDOS into a potato. 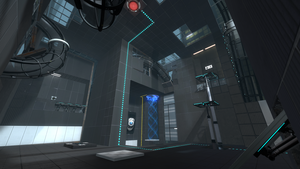 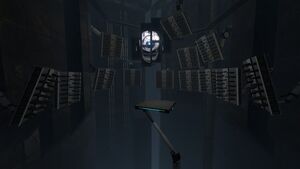 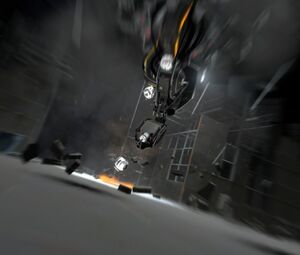 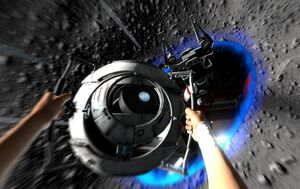 Wheatley seconds before he is thrown into space by GLaDOS 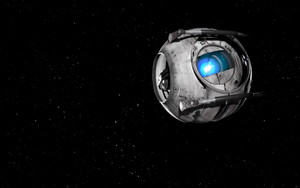 A remorseful Wheatley in space. 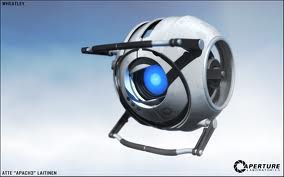 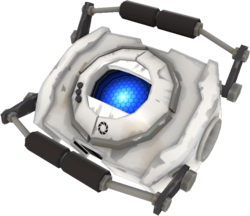 The Ap-sap in Team Fortress 2. 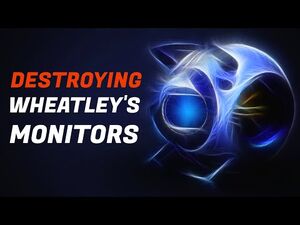