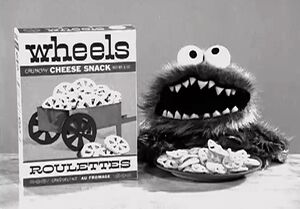 The Wheel-Stealer is a green Muppet monster with wonky eyes and sharply pointed teeth. He appeared in a General Foods commercial in 1966 for three snack foods-- "Wheels, Crowns, & Flutes". He along with the Flute-Snatcher and the Crown-Grabber had insatiable appetites for the snack foods they were named after. Each time the Muppet narrator, a human-looking fellow, fixes himself a tray of Wheels, Flutes and Crowns, they disappear before he can eat them. One by one, the monsters sneak in and zoom away with the snacks. Frustrated and peckish, the narrator warns viewers that these pesky monsters could be disguised as someone in your own home, at which point the monsters briefly turn into people and then dissolve back to monsters again.

The Wheel-Stealer was also famous for starring in a 1967 IBM training film "Coffee Break Machine" where he responds by eating the components of the coffee machine. It was later performed the same year on "The Ed Sullivan Show". This version is slightly different; in this version, the machine itself is an explosive device.

This monster would become Cookie Monster on "Sesame Street".

Retrieved from "https://villains.fandom.com/wiki/Wheel-Stealer?oldid=3392281"
Community content is available under CC-BY-SA unless otherwise noted.