One of Judge Doom's minions

Destroy Toontown to make way for a freeway.

Wheezy is a supporting antagonist in Disney/Touchstone's 1988 hybrid film Who Framed Roger Rabbit. He is one of the Toon Patrol.

He was voiced by the late June Foray, who also played Natasha Fatale in The Rocky and Bullwinkle Show, Lucifer in Disney's Cinderella, Witch Hazel, Sour Kangaroo in Horton Hears a Who!, Queen Bumble, Ma Beagle and Magica De Spell in DuckTales.

Wheezy is distinguished by his chain-smoking, and for having smoky grayish-blue fur while the other four members of the Toon Patrol all have brown. In addition to Wheezy's smoky grayish-blue fur, his clothes, fingers and teeth are all heavily discolored from nicotine. Wheezy's mouth is usually full of cigarettes, and his sharp teeth are grubby and yellow from nicotine. He wears a white pork pie hat which carries an additional stash of cigarettes, a black vest, a loose black tie, and a wrinkled gray buttoned shirt. He has blue eyes, which are frequently bloodshot. His weapon of choice is the Thompson 1928 variant of a Tommy Gun, but he only uses it once in the film (when he shoots Eddie's door open), preferring to use physical combat.

Wheezy is an unreasonable and thoughtless chain-smoker. He also coughs frequently and (as his name suggests) can almost always be heard wheezing as he breathes. If he speaks without cigarettes in his mouth, he has a deep voice (when he says "Let's go." as Roger Rabbit and Eddie Valiant escape in Benny the Cab), and if they are in his mouth, he speaks in a harsh and raspy voice (when he says "Move it!" as he ties up Roger and Jessica Rabbit in the Acme Factory). He is the second weasel to die after losing control of his laughter and also evidently from too much smoking, considering the voluminous amounts he coughs up. He also appears to be afraid of dying, as he is seen unsuccessfully trying to pull his soul back into his body, though when it breaks free, it appears to be unrepentant.

Wheezy is first seen with the other weasels in the Acme warehouse. His next appearance is in Eddie Valiant's office searching for Roger Rabbit. He uses a Tommy Gun to shoot Eddie's door open. While searching for the rabbit, he starts laughing when he sees Smartass with a bar of soap in his mouth, only to be silenced by him after Smartass spits the soap out and lets it hit Wheezy's head to shut him up, stating that if he cannot stop laughing, he will literally die laughing one day. In the bar scene, he attempts to stop Eddie but is hit in the face with a chair. Wheezy is next seen at the Acme warehouse helping Stupid drill open a wall to Toontown. Later, he is put in charge of pouring the Dip ingredients (turpentine, acetone, and benzene) into the Dip mixer and giving Psycho instructions on how to use the Dip sprayer. He later dies laughing and tries to pull his soul back into his body, but he fails. 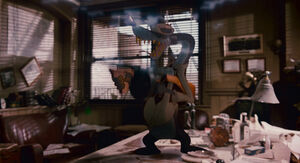 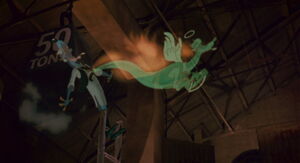 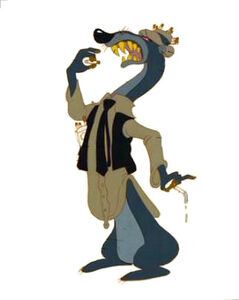