Whiplash (later Blacklash) is a villain in the Marvel universe, and an enemy of Iron Man. He is in league with Thunderbolts.

Mark Scarlotti was a brilliant technician for the Cinncinatti branch of Stark International, but his greed got the best of him. Using a special whip that could generate an electric current powerful enough to tear through Iron Man's armor, Scarlotti became Whiplash, an assassin under the employ of the Maggia. After several defeats, Scarlotti called it quits, married, and had a child, but after money troubles, he returned to villainy, and his wife was killed, he took revenge, only to try to retire once more. He was later killed by Iron Man's Sentient Armor.

Before that, he had battled other Marvel heroes, including Spider-Man and Captain America. He had also worked under and alongside other villains such as Justin Hammer, Rhino, and Scorpion.

Mark Scarlotti as Blacklash appears in the 1994 Iron Man animated series, voiced initially by James Avery and later by Dorian Harewood. He is a servant of the Mandarin alongside MODOK, Hypnotia, Dreadknight, Grey Gargoyle, Blizzard, Living Laser and Justin Hammer. 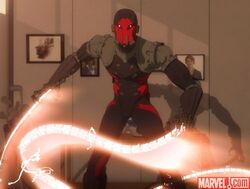