Whiplash, also sometimes called Blacklash, is a minor antagonist in Marvel Comics. He (or she; depending on the iteration) is a supervillain who utilizes whips and other tools to perform crimes. Although the character has had numerous iterations, they usually serve as an enemy towards Iron Man, as well as other heroes such as Spider-Man and the X-Men.

The first incarnation of the character, Mark Scarlotti was a gifted electrician within Stark International's Cincinnati branch, but greed and the desire for a life of luxury eventually got the better of him. Deciding to become a professional criminal to increase his wealth, he constructed a suit and a sophisticated metal whip and became a weapons dealer, special agent and assassin for the criminal organization the Maggia, and fought Iron Man and several A.I.M. agents attacking a Maggia gambling ship on their behalf.

Following this, he was assigned by the Maggia to work undercover at the Stark International Cincinnati plant he worked for, and became Head of Research there. Once again, he would engage in another inconclusive battle with Iron Man and flees the scene, quitting the Maggia afterwards. He and fellow supervillains Melter and Man-Bull are recruited by Black Lama to form the team the Death Squad and fight Iron Man. The three of them then enter a "supervillain war" to win the Black Lama's Golden Globe of Power, but are all defeated.

Whiplash rejoins the Maggia and battles with Iron Man and Spider-Man in New Jersey, eventually being defeated by the vigilante Wraith. Justin Hammer would then hire him, and he, along with Melter and the original Blizzard, would attempt to rob an Atlantic City casino, only to be stopped Iron Man. Whiplash is released from prison by Hammer and battles Iron Man again as one of his costumed operatives, but, despite overwhelming odds, he and the other villains are defeated.

Whiplash is re-employed by an unnamed consortium, who is financed by Hammer, to kill Stark employee Vic Martinelli, and is provided with an upgraded costume and weaponry, plus the new alias Blacklash. In spite of his upgrades, however, Backlash is defeated by Iron Man again and subsequently humiliated by being dragged before his employers. As Whiplash again, he makes a brief appearance as an assassin hired by the Mad Thinker in a failed attempt to kill the Thing as he is recuperating at a New York hospital.

He is eventually diagnosed as manic-depressive by prison psychiatrists and thus attempts to reform, but, being rejected by his parents and residents of his home town, he gives up on redemption and becomes Blacklash again. While attempting an assassination for the Maggia, he is confronted by Spider-Man whom he weakens with his whip, but is defeated by the second Iron Man. Spider-Man beats Blacklash once again, who is also later apprehended by Captain America while committing several robberies. Blacklash is rehired by Justin Hammer and sent with the Beetle and the second Blizzard to assassinate his former agent, Force. Iron Man, Jim Rhodes and Force, however, defeat the trio.

At Hammer's request, Blacklash, Boomerang, and the second Blizzard stop industrial sabotage by the vigilante Ghost. Blacklash is sent to work with Iron Man and Jim Rhodes against the saboteur, but betrays them. Together with Spider-Man's enemy Rhino, he hunts down fellow rogue agent Scorpion, who fails to return stolen weaponry to Hammer.

Eventually, Scarlotti decides to renounce his criminal identity, married and had a child. Unfortunately, due to a lack of money, he is forced to re-assume his criminal identity again, and becomes the target of an assassin, who kills his wife when she returns to their apartment. Seeking vengeance, he finds and then kills the assassin, and vows to abandon the identity of Blacklash forever. Scarlotti, however, is hired by a rival of Stark and returns as Whiplash, with an upgraded costume and new weaponry. Whiplash manages to battle Iron Man to a standstill in their first encounter, but is killed several weeks later by Iron Man's new sentient armor, which crushes his throat against Tony Stark's wishes.

The second Whiplash, Leeann Foreman was a professional criminal who possessed unrevealed mutant abilities and utilized adamantium wires that connected to her gloves as whips. She was initially part of Critical Mass' mutant Band of Baddies, who kidnapped a mutant girl and her father in order to coerce them to join their band. They forced the daughter to knock out Spider-Man and Wolverine, but they quickly recovered. The daughter then unleashed her powers, blew up the warehouse they were in, and defeated all of the Baddies. Whiplash disappeared after the daughter's telekinetic explosion enabled her to get free.

She later joined the Femme Fatales, and was hired by the Chameleon to lure Spider-Man into a trap by threatening a United Nations ambassador, although Spider-Man succeeded in defeating the villains and saved the ambassador. The Fatales then joined forces with Scorpion and Tarantula, but all of them were defeated by Spider-Man and Black Cat. The Femme Fatales later received an invitation to join Superia and her organization of female criminals, the Femizons. They accepted, and were among the superhuman females aboard Superia's cruise ship, where they battled Captain America and Paladin. Whiplash also traveled to Superia's private island to be one of her new Femizons.

After the group disbanded, Whiplash teamed up with Orka, Shockwave and Killer Shrike in a plot to take over a retired aircraft carrier, the USS Intrepid, however, she and her allies were defeated by the Heroes for Hire. She was later seen in the "Bar With No Name" in a black market auction for the Venom Symbiote.

During the "Hunt for Wolverine" storyline, Whiplash, now using the alias Snake Whip, joins the Femme Fatales in helping Madame Viper attack Kitty Pryde's group at the King's Impresario Restaurant in Madripoor. She engaged Jubilee in battle before Kitty Pryde gets her and Domino away from the restaurant. Following that victory, Snake Whip stayed by Viper's side as she ordered Knockout and Mindblast to have the defeated Rogue and Storm delivered to their clients. As Snake Whip asks if they are going to ignore Sapphire Styx's vampiric appetite, Viper says that they have to obey the representative's orders and "let the @#$%& feed."

After another call from Soteira's representative, Viper and Snake Whip check up on Sapphire and find that she is acting strange and claiming that Wolverine's Patch alias is there. Snake Whip works to restrain her only to be knocked out. Upon recovering, Snake Whip starts to see Patch attacking Sapphire, even though Viper cannot see this happening.

The fifth incarnation of Whiplash, Anton Vanko was a young scientist from a small Russian village by the name of Volstok. One day, the village is attacked by someone in a stolen suit of Iron Man armor seeking to frame Tony Stark, who murders a number of townspeople, including Vanko's father, Igor. Vanko is able to shoot the impostor just before he flees using a specialized rifle, causing the chest plate on the armor to come off. Vanko then becomes obsessed with getting revenge on Stark, still believing him to be the man who attacked his village, and decides to use the chest plate to fashion a suitable weapon to do so. Over the next six months, he reverse engineers a suit of body armor equipped with energy whips, and vows to kill Stark in order to avenge his father.

Breaking into the prison where Stark is being held for his alleged crimes, Vanko kills several guards and attempts to track down and murder Stark and his confidant Pepper Potts. Stark manages to fight off Vanko using a crude suit of Iron Man armor fashioned from parts of various machines around the prison, and forces him to flee. After Stark tracks down the criminal syndicate who framed him, Vanko arrives at their headquarters, intent on finishing off Iron Man once and for all.

It is there that Vanko learns that Stark was indeed framed and that the syndicate was hired to destroy Volstok by secret international consortium funded by several governments including the USA and Russia, notably Russian Prime Minister Vladimir Putin, in order to wipe out an activist who was creating anti-Putin sentiments. Despite learning of Iron Man's innocence, Vanko still blames his technology for the attack and makes one final attempt to kill him. After the building catches fire, both men are ultimately forced to run to safety, and Vanko makes his escape. Following this, Stark is cleared of his alleged crimes, and helps rebuild Volstok. As this is happening, Vanko is seen in Moscow approaching Saint Basil's Cathedral in the Red Square preparing to properly exact vengeance this time around.

Whiplash is later recruited by Max Fury as a member of the Shadow Council's incarnation of the Masters of Evil. During the "Infinity" storyline, Whiplash is one of the villains recruited by Spymaster to help him attack the almost-defenseless Stark Tower. In his latest appearance, he attacks Squirrel Girl and her sidekick Tippy-Toe while she is wearing a suit of Iron Man armor, mistaking her as the real Iron Man, although he is defeated.

As part of the All-New, All Different Marvel event, a woman takes up the alias Blacklash and the villain Power Broker hires her through the Hench App to protect his unveiling of the Hench App 2.0. She ends up fighting with Ant-Man and Giant Man, although gets away due to Giant Man's inexperience with crime fighting.

Although the different Whiplashes varied greatly in terms of character and origin, they possessed many similar traits in terms of their abilities. The most obvious shared ability between all of them would be their use of metallic whips and/or whip-like metal cables, which they all used virtually equally in terms of skill. The effects or additional abilities of their whips depends on the incarnation; Mark Scarlotti's whips could be swung fast enough to deflect bullets and even become ridged as to be used as nun-chucks or vaulting poles, Leeann Foreman's whips could extend up to 25 feet in length and are tipped with adamantium barbs, and Anton Vanko's whips are made of energy and can effortlessly shred through metal. Generally, the suits worn by the various Whiplashes improves their endurance greatly, isolating from most blows at minimum.

Outside of this, the skills and equipment of the different Whiplashes varies greatly. Scarlotti possessed various devices stored inside his weapons pouch, like anti-gravitational bolas or a necro-lash that releases electrical energy from his gauntlets, and is also an expert engineer and weapons designer. Anton Vanko is a skilled athlete and possesses a deep understanding of robotics, allowing him to forge his suit out of destroyed Stark tech. The female construct Whiplash, the one most unrelated to the others, could possess people and thus take control of their body and abilities. 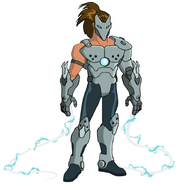 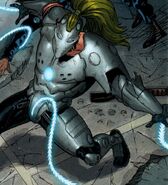 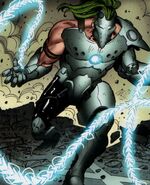 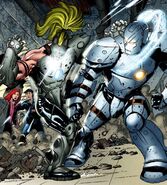