Whippy (named ヒッティー , Hitti in the original Japanese version) is the evil clown monster who appears in the Kirby: Right Back at Ya! episode Cowardly Creature. He is perhaps one of Nightmare Enterprises' most important monsters.

He was voiced by Nobuo Tobita in the Japanese version, and Jamie McGonnigal in the English dubbed version.

Whippy is a crazed circus clown that juggles knives, spiked balls, and regular circus balls. He wears a white-and-green-striped suit adorned with a frilly ruffled collar, pointed shoes, and a red party hat with white spots. He has white skin, curly green hair, and has face paint, much like Perot. He carries a blue whip wherever he goes. He also has a maniacal laugh and screeches his own name.

Along with the other clowns at N.M.E., Whippy is the Demon Beast that trains the newer Demon Beasts, such as Poppy Bros. Jr. and Mr. Frosty. Whippy is seemingly the ringleader of the training school and oversees the others. The whip he uses delivers a powerful and destructive electric shock that can turn even the friendliest of Demon Beasts into violent and dangerous ones. When Phan Phan escapes from Nightmare Enterprises, King Dedede orders Whippy to take care of it.

Both the king and Whippy head to the lake where Phan Phan, Kirby, and his friends are. Whippy pops up and grabs Phan Phan by the trunk with his whip, then reels him in and starts shocking him. Kirby runs up to his elephant friend only to get repelled. After Whippy stops shocking him, Kirby approaches Phan Phan. Phan Phan knocks him away and Whippy jumps on top of him, ordering him to chase Kirby. During the chase, Whippy maniacally juggles atop Phan Phan's head.

When he corners him, Whippy throws spiked balls onto Phan Phan's trunk. The balls enlarged and get thrown. Kirby finally inhales one of them and becomes Throw Kirby. Throw Kirby gets a hold of Whippy and starts bashing him against the tree in the center of town. Kirby uses his Tornado Throw attack and throws Whippy into space, where he is destroyed when he gets sucked into a black hole. 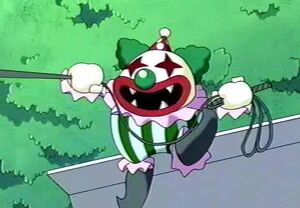 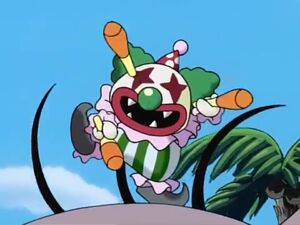 Whippy juggling while on top of the possessed Phan Phan. 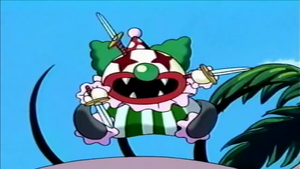 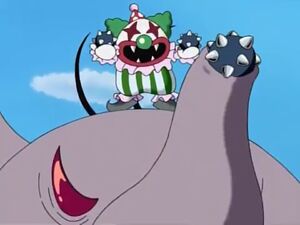 Whippy loading up Phan Phan with spiked balls to attack with. 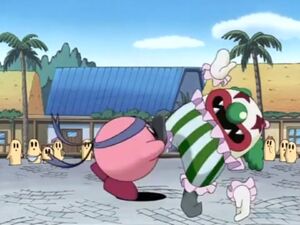 Kirby grabbing Whippy and about to throw him into space. 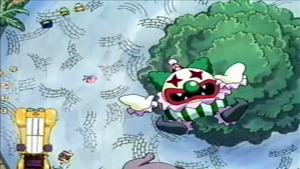 Kirby throws Whippy to his demise.
Add a photo to this gallery

Retrieved from "https://villains.fandom.com/wiki/Whippy?oldid=3831973"
Community content is available under CC-BY-SA unless otherwise noted.