Henchman
Whisper, also know as The Whisper, is a supporting antagonist in 1954 Ian Fleming James Bond novel Live and Let Die who was adapted for the 1973 film of the same name. He is one of the henchmen of Mr. Big, the story's main antagonist.

He was portrayed by the late Earl Jolly Brown.

Whisper was born on 'Lung Block', on Seventh Avenue, at 142nd Street, where death from TB was twice as high as anywhere in New York. During his childhood, Whisper's quiet voice is attributed to a bout of tuberculosis during infancy, from which one and a half of his lungs had to be removed, leaving him with only half a lung with which to breathe and talk.

Later, Whisper became an assistant to the gang in Harlem run by Mr. Big, working as a telephone messenger. When Bond escapes Mr. Big's men, Whisper is sent out to pursue him, though unsuccessful. He is arrested in the end of the novel after Mr. Big's death.

When the medium Solitaire tells Kananga that James Bond is coming for him, Kananga sends Whisper to stop the agent. While Bond is picked up by a CIA agent and driving over the highway, Whisper drives by and kills the CIA agent with a dart gun hidden in his windshield. However, Bond is able to grab the wheel and steer the car to safety. He then calls Felix and tells him about the agent's death. He also describes the killer's car to Leiter. Leiter later tracks the car down to a voodoo shop and sends Bond there. While at the voodo shop, acting as a customer, Bond witnesses Whisper arrive and go into the back of the store. Following him, Bond enters a parking garage where he finds Whisper's car. He is then disturbed by Kananga and his associates, who arrive at the parking garage and leave in a car. Bond follows them.

Following Kananga to San Monique, Bond checks in at a hotel on the island and orders champagne at the room service. While Bond is taking a bath, Whisper arrives with the champagne. Due to his soft voice, Bond has difficulties understanding the man. While Bond is paying Whisper for the champagne, someone throws a poisonous snake into Bond's bathroom, but Bond later kills her with the help of a cigar and deodorant.

After having captured Bond in his underground base, Kananga takes Bond's gun, asking what it does. Bond replies that it is a shark gun firing compressed gas pallets. For his own amusement, Kananga fires the gun at the sofa Whisper is sitting on, causing it to inflate enormously until it explodes, causing a shocked Whisper to fall to the ground.

After gloating over Bond, Kananga straps him and Solitaire onto a which, planning to have them eaten by sharks. Whisper then starts lowering the winch into the water and opens a underwater gate, through which sharks enter. With the magnetic device hidden in his clock, Bond obtains the gas pellet Kananga played with before. Bond also uses his clock to free himself from the ropes. Jumping down onto the ground, he runs towards Kananga. Whisper tries to warn his master, but due to his whispering voice Kananga cannot hear him. Bond drops Whisper into one of the air tight metal capsules used to keep the heroin dry and engages Kananga.

The film does not reveal what happens to Whisper after that, but according to James Bond's official publications, he was incarcerated for his crimes. 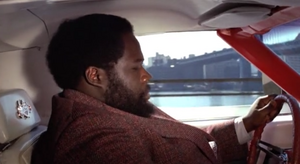 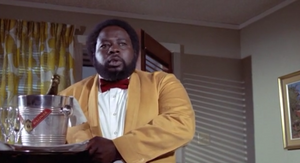 Whisper posing as a waiter 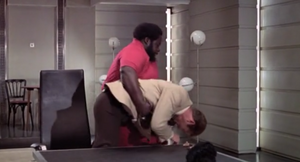 Whisper carries a knocked out Bond to the car 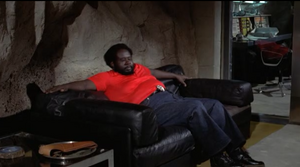 Whisper on the sofa 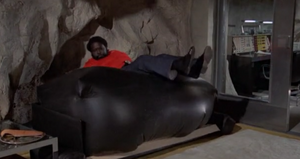 Whisper on the sofa while it inflates