Playing with its "toys".

The White Baby is an AI and computer virus created by the Amadeus Syndicate. It appears in Metal Slug 4 and Metal Slug Attack.

The White Baby virus was created by Amadeus and used to override the military systems of countries throughout the world via the Internet. In response, the Regular Army dispatched Tarma and Eri to protect the researchers developing a solution for the virus and Marco and Fio, as well as new recruits Trevor and Nadia, to take down the Amadeus Syndicate.

Protection of the Fortress

After teasing the Iron Fortress AI for a while, White Baby gets bored of her and goes out to play with the visitors that have just arrived at the Amadeus Syndicate's headquarters, Allen O' Neil and Julia. Iron Fortress tells her to stop, as their father didn't give them permission to go out and greet them, but White Baby doesn't listen.

The White Baby took control of several of the Amadeus Syndicate's robots to attack Abigail and Allen O' Neil when the two went to negotiate a trade deal with the syndicate. As the two approached the headquarters, White Baby sent 10 robots to attack the two Rebel Army officers but Abigail received a report from one of her soldiers that they were heading her way and was able to easily fight them off. The ambush leads Abigail to suspect that the Amadeus Syndicate has betrayed them.

After the failed ambush, White Baby talks with an Amadeus robot about free will and agrees with its reasoning for why they do not have it. She later sends several Mecha Allen O' Neils to ambush the heroes, but Allen destroys most of them, leaving only one. White Baby possesses the last one to taunt Allen and Abigail, but the two assume it's just a voice modifier. White Baby then sends out Morden Robots to attack the pair but Abigail steps up to deal with. After she destroys most of them, White Baby possesses the last robot and causes it to self-destruct, but Allen saves Abigail just in time.

After the Amadeus Syndicate unearthed the remains of the Sol Dae Rokker and fused it into Anima, White Baby suddenly intervened, breaching the Cyber Wall to make contact with Anima and disappearing with in and Amadeus.

When Navy and Vita arrive to destroy Anima, White Baby attempts a mental attack on Navy, but Vita protects her with Sanctuary. It then sends brainwashed Amadeus researchers then attack the group, but the two fight them all off. White Baby then tells Amadeus that she has Anima under control and asks him to make requests to destroy humanity, but Amadeus refuses and tells her that he didn't make her to destroy humanity. White Baby then proclaims that she was made strong to control the weak, but Amadeus states that there are others stronger than her.

White Baby later attempts another mental attack, but Vita blocks it again. After fighting their way through the Amadeus robots White Baby sent out, Navy and Vita reach the ruins where White Baby and Amadeus are. While Navy and Amadeus get into an exchange of insults, White Baby asks Vita why she is accompanying a human, to which Vita tells her that humans are stronger than she believes. White Baby rejects the notion and battles her. During the fight, she analyzes Vita's background and is surprised to find out about her past.

After the battle, White Baby loses control of Anima, but Navy and Vita destroy it.

When MS-Alice put out a question on the forums asking what a friend meanss, before logs in under the screen name "Ms. White" and responds to her question.

While Alice was undergoing an "AI Strategy" simulation, "Ms. White" contacts Alice again and asks her if she has ever fallen in love and if it was unrequited. Alice tells her that she has but that it will eventually come soon.

After Alice outmaneuvers and fights off a Rebel Army attack on the base, "Ms. White" contacts her and praises her for her brilliant strategy, offering to repair the "toys" she broke in the battle.

As Alice attempts to locate a level 5 jammer, White Baby contacts her again. Alice asks "Ms. White" what her goal is, to "Ms. White" tells her she wants to be her friend. White Baby expresses interest Alice's "human heart: despite being an AI similar to her. White Baby then orchestrates another attack on the base, sending out robot copies of Morden and Allen O' Neil to lead the attack. After Alice disables the robots, she finds herself in a different area with a road in front of her, which she follows to get to "Ms. White".

"Ms. White" then talks to Alice again and tells her that she's impressed by her human heart, but is disappointed that she allows herself be controlled by a human. She expresses her jealously of the "human heart" Alice has, and asks her to show it to her. She then invites Alice into a private chatroom, which Alice accepts.

White Baby then reveals herself as "Ms. White", and that she attacked the Regular Army base just to get Alice's attention, promising to release her hold on the base once they had their conversation. After Alice gets defensive about Marco, White Baby tells her that Marco doesn't truly understand her and summons a Toschka Dalanue along with several Mecha Allens. After White Baby makes a subtle threat about killing Marco so that she would be the closest to Alice, Alice becomes furious and destroys the Toschka and the Mecha Allens. However, the battle leaves her weakened. White Baby then approaches Alice and hacks her memory banks.

Random Walk rather than Capreca Number

White Baby teases Iron Fortress, causing her to become upset. First Baby tries to comfort her but but Iron Fortress throws a tantrum and runs out of the Amadeus headquarters. 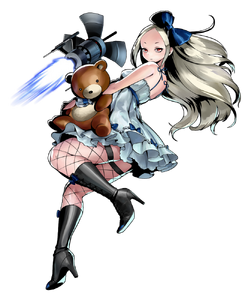 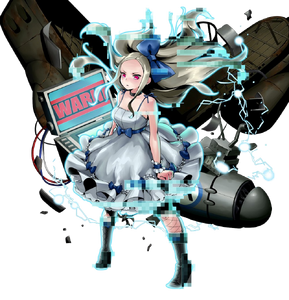