Member/associate of the White Fang

The unnamed White Fang Associate is a minor antagonist from the ongoing American cartoon web series RWBY. He is a reptilian Faunus and associate/possible member of the White Fang under Adam Taurus.

Though it it unknown when and why the associate joined the White Fang. He became an associate of Ilia Amitola and the Albain brothers in Menagerie, likely serving as a spy and informant.

After Blake Belladonna and Sun Wukong manage to steal Ilia's Scroll, they use it to gather as much information as they can about the White Fang's presence in Menagerie, including learning about the associate's existence and identity. They go out and look for him, and succeed in doing so, as they find him in the marketplace buying a knife from a vendor.

He sees the two approach and Blake start to draw her weapon. He quickly becomes angry and pulls out a revolver, firing at them. Blake blocks the attack, and the associate runs, with the heroes giving chase. He turns and fires at them again until he is out of ammunition, then turns and runs again. As he runs, he happens upon a carriage with a cart. He cuts the cart loose, sending it careening down towards his pursuers and a group of civilians. Sun manages to stop the cart, and Blake uses it to propel herself forward to catch up with the associate. She throws her weapon at him, tripping him up.

Blake begins to pull the associate towards her, but then is stopped and attacked by Ilia. She frees the associate from the weapon tangled around his leg, then shoots down a piece of scaffolding to create a cover for her and the associate to escape. Sun catches up to Blake, who reports that the associate got away.

Not much is known about the associate's personality, but he does show a certain ease or confidence in himself, as he travels around in open view and even purchases weapons without anyone suspecting him. It is only when his cover is blown that he turns wrathful and violent, even opening fire on hi enemies in a crowd of innocent bystanders. He is also cowardly, as his first instinct when danger approaches is to open fire and then flee. He does not seem to care about the people around him, as he endangers innocents by firing in a crowd and sending loaded carts towards them. He is, however, rather incompetent, as he does not pose a strong threat and requires assistance from other White Fang members to escape. 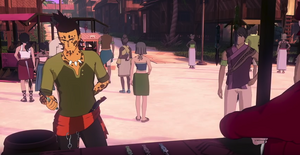 The associate buying a knife. 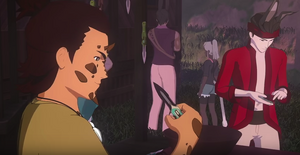 The associate admiring the knife he purchased. 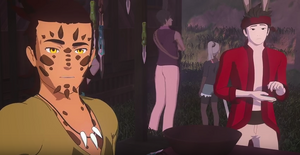 The associate noticing Blake and Sun. 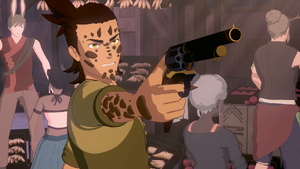 The associate pulling a gun. 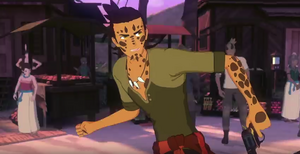 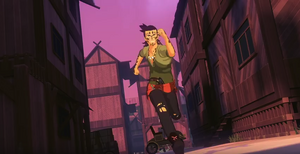 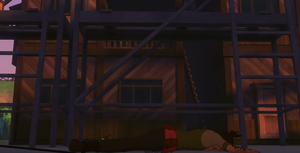 The associate tripped up by Blake. 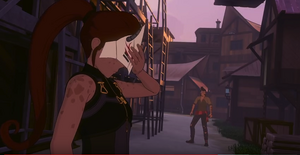 The associate saved by Ilia before making his escape. 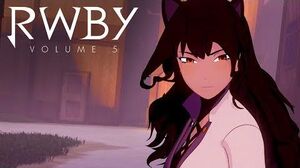