High-ranking member of the White Fang

Recruiting Faunus into the White Fang.

Get revenge on the Schnees (ongoing).

The White Fang Lieutenant is a minor antagonist in the American web cartoon RWBY. He is high-ranking member of the White Fang that appears in the episode "Painting the Town..." at the White Fang Faction Meeting. He later appears in "No Brakes", where he fights Weiss Schnee.

He is voiced Gray G. Haddock in the English dubbed, and by Kenji Nomura in the Japanese dubbed.

The Lieutenant has a muscular appearance and short black hair. He wears the standard pants and black gloves of other White Fang members, but his forearms have metal guards. The Lieutenant also has a distinctive top with a collar that sticks up around his neck and lacks the buttoned look of the standard garb.

He also wears a custom Grimm Mask that covers his whole face and has red eyes with thin red streaks streaming to the bottom of the mask. On his left arm he bears one or more black tattooed designs.

It is unknown what type of Faunus the Lieutenant is. It's possible that his uniform covers his animal trait, or that it is a trait that can be hidden, similar to Tukson'sclaws.

In "Beginning of the End", the Lieutenant is seen in a flashback where he accompanied Adam Taurus to the meeting with Cinder's Faction, with the former refusing to have the White Fang work with them. Following this, he pledged to pursue Blake after her betrayal in the "Black" Trailer, before rushing outside after learning that Cinder Fall and her henchmen laid waste to their camp and killed many of their rank and file. This led to Cinder leveraging Adam for the White Fang's alliance, forcing him to accept the offer.

In "Painting the Town...", the Lieutenant was present at the White Fang gathering, introducing Roman Torchwick. After Roman's speech and presentation of the Atlesian Paladin-290 was finished, he asked all recruits to step forward. But then Blake Belladonna created a distraction, allowing her and Sun Wukong to escape.

In "No Brakes", the Lieutenant is seen guarding one of the cargo cabins, where he fights Weiss Schnee, remarking that he finally has the chance to kill a member of the Schnee family. While Weiss was able to hold the upper hand during the majority of the fight, the Lieutenant eventually managed to overpower her. However, before he was able to deal the finishing blow, Weiss was saved by the timely intervention of Blake.

It's still unknown what became of the Lieutenant after the train crashed into Vale.

The White Fang Lieutenant is featured as a unit in RWBY: amity Arena, being an extremely strong and durable unit that double-attacks with his chainsaw.

Not much is known about him, but it appears that not only is he capable of leading many White Fang members, he also harbors a strong grudge against the Schnee family, expressing his satisfaction at the opportunity to kill one.

Additionally, he is shown to be very loyal and determined to the White Fang itself, pledging to hunt down Blake after her betrayal in the "Black" Trailer.

In terms of overall capability, the Lieutenant is considerably more skilled than the standard White Fang foot soldier, capable of going toe-to-toe with and even overcoming a first-year Huntress-in-training.

His fighting style appears to forgo subtlety in favor of brute force, as exemplified by his weapon, a massive chainsaw which apparently does not possess a secondary function. Although clearly lacking in speed and finesse, consistently being outmaneuvered by Weiss during their battle, his weaknesses are offset by his incredible strength and durability. In the duel, he is seen shrugging off a great deal of punishment before seizing an opportunity to counterattack decisively. 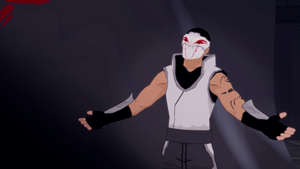 The Lieutenant speaking with the White Fang recruits. 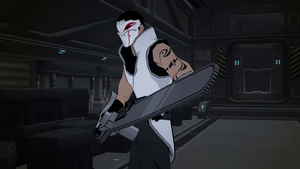 The Lieutenant wielding his chainsaw. 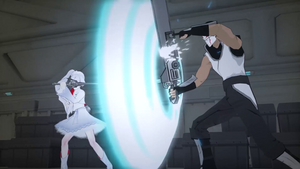 The Lieutenant battles with Weiss Schnee. 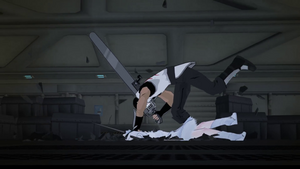 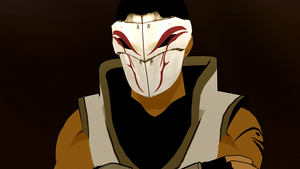 The Lieutenant in a flashback. 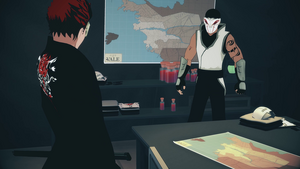 The Lieutenant with Adam Taurus. 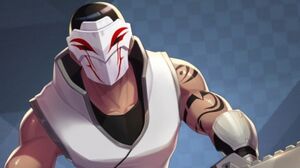 The White Fang Lieutenant as he appears in RWBY: Amity Arena. 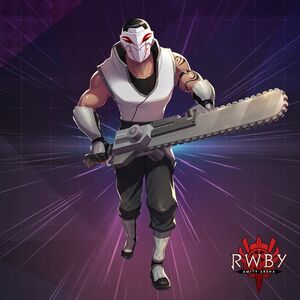 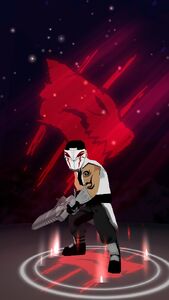