Founder and owner of Globo-Gym

Leader of the Purple Cobras

Take over Average Joe's gym and turn it into a car parking house.

Get Kate to be his girlfriend (all failed).

White Goodman is the main antagonist of the sports comedy film Dodgeball: A True Underdog Story. He is the founder of Globo Gym and the leader of the dodgeball team known as the Globo Gym Purple Cobras. He is also the arch-rival of Peter LaFleur.

He was portrayed by Ben Stiller, who also played Tony Perkis in Heavyweights, Hal in Happy Gilmore, and Khaka Peü Peü in Phineas and Ferb.

He is rude, arrogant, condescending, disrespectful, greedy, obnoxious, and competitive.

Mr. Goodman first appeared in the movie when he purchased the Average Joe's gym after its owner, Peter LaFleur skipped out on its mortgage. After Peter pleaded with Goodman, he said the deal was final and unless LaFleur could somehow raise $50,000 in thirty days. Meanwhile, White learns of a recently hired secretary named Kate Veatch. White repeatedly and unsuccessfully attempts to charm her, and she instead develops a friendship with Peter while reviewing his financial records. Then, Goodman hears about their plan to enter the dodgeball tournament, whose prize is convieniently $50,000, held in Las Vegas.

White has been spying on Average Joe's using a hidden camera, and forms his own elite dodgeball team to oppose them. Peter is approached by Patches O'Houlihan, an aging and wheelchair-bound man who was an ADAA dodgeball champion in his prime,  who volunteers to coach the Average Joe's team. Patches' enhanced training regimen includes throwing wrenches at the team since throwing wrenches are more difficult to see than balls, forcing them to dodge oncoming cars, and constantly berating them with insults. Kate demonstrates skill at the game, but declines an offer to join the team as it would be a conflict of interest due to her contract with White. White observes this and arranges for Kate to be fired from her law firm so that he can recruit her onto the Globo-Gym team. Infuriated, Kate joins the Average Joe's team.

At the tournament in Las Vegas, Average Joe's suffers early setbacks but manages to advance to the final round against Globo-Gym. The night before the match, Patches is killed by a falling sign. This shakes Peter's confidence; he expresses his fear that the team will lose to Globo-Gym and berates one of his team mates, Steve the Pirate for his childish pirate persona, causing Steve to leave the team. White offers Peter $100,000 for the deed to Average Joe's, which Peter accepts. The day of the final round, one of the Joe's leaves to help his classmate Amber with a cheer leading competition, leaving the Average Joe's team without enough members to compete. Peter has a chance encounter with Lance Armstrong, who encourages him to rejoin his team, but by the time he arrives Average Joe's has already been forced to forfeit. One of the Average Joe's, Gordon, finds a loophole in the rules that can overturn the forfeiture by vote of the judges, and Chuck Norris casts the tie-breaking vote to allow the team to play.

After a fierce game, Peter and White face off in a sudden death match to determine the winner. Inspired by a vision of Patches, Peter blindfolds himself and is able to dodge White's throw and strike him, winning the championship and the prize money. White declares the victory meaningless, since Peter had sold Average Joe's to him the previous night, but Peter reveals that he used White's $100,000 to bet on Average Joe's to win; with the odds against them at 50 to 1, he has won $5 million. He buys a controlling interest in Globo-Gym, which now also includes Average Joe's, and fires White. Steve the Pirate returns to the group after Peter apologizes to him, and Steve says that he'll give up the dumb pirate act. But when Peter shows him the five million in a chest, he goes back to his pirate act and give sa triumphant 'yargh!'. Kate reveals that she is bisexual and kisses both Peter and her girlfriend. Justin also finds romance with Amber, while Owen begins dating Fran, a large, terrifying, German woman from the Globo-Gym team. Peter opens youth dodgeball classes at Average Joe's, while White becomes obese by drowning his sorrows in junk food, blaming Chuck Norris. 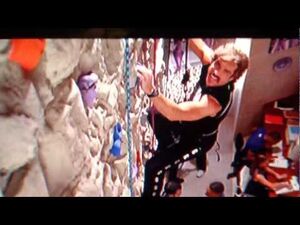 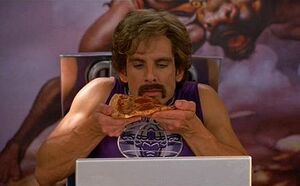 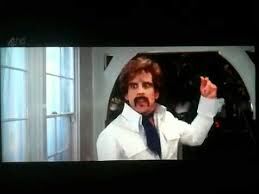 "Nobody makes me bleed my own blood! Nobody!" 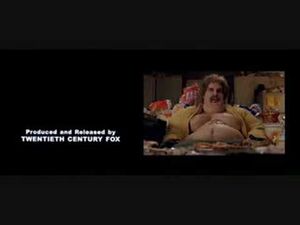 White in the post-credits scene.