Assimilate into Caesar's Legion and until then, live to plunder and destroy. 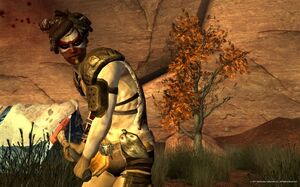 The White Legs are the main antagonists of the second Fallout: New Vegas expansion, Honest Hearts. They are an evil raider tribe operating in Zion Canyon and originating from Salt Lake City in northern Utah, where they were initially formed by a group of direct survivors of the Great War driven to barbaric scavenging. Their leader is Salt-Upon-Wounds.

The White Legs are currently seeking to join Caesar's Legion, and recently destroyed the Mormon village of New Canaan, where Caesar's former, redeemed legate Joshua Graham, now known as "The Burned Man" lived. Graham survived the attack and he and the other survivors fled to Zion, where they joined with the local tribes there. When the Courier arrives in Zion on a caravan trip with another trade company, the White Legs are in the process of making another attack against Graham and his people, and immediately upon arrival the Courier is ambushed by a group of them, who kill the other members of the caravan expedition.

After escaping the ambush, the Courier meets up with Joshua Graham and his allies, and eventually helps lead a final battle against the White Legs. Depending on the player's choices, the Sorrows and Dead Horses tribes either are evacuated from Zion or launch an all–out assault against the White Legs tribe, and Salt-Upon-Wounds may or may not be killed, possibly being either executed by Graham or falling in regular combat. Afterwards, the White Legs retreat to parts unknown, and are not accepted into the Legion even if the other tribes were evacuated (because they failed to kill Graham, and also because most of the White Legs are female, and Caesar's Legion turns all women into slaves). Later the tribe falls apart.

Retrieved from "https://villains.fandom.com/wiki/White_Legs?oldid=3539400"
Community content is available under CC-BY-SA unless otherwise noted.