Dominion of the Third Region: Binah

Waging wars with other Dominions.
Committing Spiritcide.
Killing and torturing other Kurumi's clones.
Conquesting other worlds.

Conquer all Dominions of the Quasi-Spirits and destroy all dimensions of the Neighboring World.

Wipe out all inferior Quasi-Spirits of the existence.
Destroy the Neighboring World so she can go to the Real World and meet Shido Itsuka to make him her King or kill him.
Kill the original Kurumi Tokisaki and claim the title of the Worst Spirit.
Find and kill all Spirits of the Real World to claim herself as the Queen of the Human World.

Originally known as Kurumi Tokisaki, and later renamed as White Queen (in Japanese: 白の女王, Shiro no joō), also known as Inverse Kurumi, White Kurumi, Innocent, Mad Tyrant, Crazy Ruler, Queen of All, Ruler of the Quasi-Spirits and possibly hundreds more is an Inverse Kurumi Clone who controlled most of the Quasi-Spirit world and serves as the overall main antagonist of Date A Bullet. She is the Dominion of the Third Region: Binah in the Neighboring World who seeks to invade and control the rest of all Regions with her Empty Army but it's later revealed she desires to cause the complete destruction of the Quasi-Spirit world to meet Shido Itsuka and claim the Human World for herself to rule forever. She is also the spiritual successor to Isaac Ray Peram Westcott, replacing him as the primary antagonist of the franchise after his death.

She is the first main antagonist of the franchise to be an Inverse Spirit and is known as the cruelest version of Kurumi Tokisaki to date, as well as being the most evil Inverse Spirit to show up so far; serving as a mirror for the anti-heroic Kurumi Tokisaki. White Queen's Demon King is called Lucifugus (Lunatic Emperor). It takes the form of an astronomical clock, saber, and gun. Her 12 bullets are named after the Zodiac signs in Hebrew, and. As the Inverse Form of Kurumi's Angel, Zafkiel, Lucifugus controls space rather than time and grants White Queen the most dangerous powers in the Neighboring World.

White Queen is in fact an clone of Kurumi Tokisaki that became an Inverse Spirit and was teleported to the Neighboring World, where she became the White Queen and dominated the Third Region for herself, becoming the biggest enemy for all Quasi-Spirits because of her threat, plans and malice that all made her the most vile and dreadful being in the dimension. As a heretic existence, all Regions of the Neighboring World declared war against her, resulting in the Neighboring World falling into a bloody war. After the White Queen took control of Third Region, she transformed the dimension into an endless torture dungeon where she tortured and experimented in millions of other Kurumi's clones and Quasi-Spirits to transform them into Empty and Jabberwocky monsters and create a powerful army of monsters to take control of both Neighboring and Human World.

A ruthless, cruel, sadistic and narcissistic woman who is known as the very embodiment of death itself by all Quasi-Spirits, White Queen was unusual in that she seemed to lack emotions such as love and was void of empathy, something that would transform her into a dreadful and scary legendary figure in the Neighboring World. While traveling in the Ninth Area with Hibiki, Kurumi encounters her and is revealed White Queen was the catalyst "monster" that was tormenting the Neighboring World with wars, genocides and terrorist attacks. White Queen, who suddenly appeared in the Neighboring World, is the biggest enemy for all Quasi-Spirits because of her threat level and has been constantly trying to take over other Regions for herself, starting bloody wars and leaving countless dead to satisfy her megalomaniac desires. War has been ongoing against her force based in Binah, the Third Region, which she has taken over as her headquarters.

When she took over the Third Region, she estabilished her own kingdom and formed her own cult of personality, posing as the Supreme Queen of Binah. Her fascist agenda led to Spirit Wars and the deaths of millions people, including her own subordinates who swore loyalty to her and sent them in suicidal missions to please her. Despite calling herself Queen, other Dominions would refer to her as a brutal and bloody dictator who lead an army of monsters and brainwashed Empty and Quasi-Spirits that often engaged in suicide and mass murder of innocent Quasi-Spirits. For committing numerous war crimes and atrocities, White Queen, and by near-universal accounts the most monstrous and terrifying leader in the Neighboring World, led her nation into a disastrous war and triggered the extermination of millions of her own citizens due to her anti-Semitic ideology and incredible xenophobia against Quasi-Spirits, a race she considered inferior, repulsive and disgusting to the point it could be considered a near-mirror form of Adolf Hitler's hatred against Jews.

Since the initial appearances in the Neighboring World, White Queen has become a widely recognized symbol of evil and cruelty, easily being known for her sinister deception, aggressive totalitarism method of ruling her Region and nazi-ideology that inspired hatred for Quasi-Spirits that were inferior.

White Queen was an Inverse Spirit of Kurumi Tokisaki, therefore she was similar to Kurumi Tokisaki in physical appearance as a whole. White Queen has ivory skin and long, white hair usually tied in long twin tails. Her right eye is red-tinted while her left eye appears as a blue, empty like if it was dead.

Unlike Kurumi Tokisaki's Astral dress that is more similar to a gothic lolita's style, White Queen is total opposite of her original counterpart and is more reserved about her skin. She wears a white navy military hat and a long military dress with a cleavage cutout that is also customized with epaulettes which was seen in soldiers from the Imperial era (1600s - 1800s) of French.

Like any Inverse Spirit, White Queen had the inverse powers of Kurumi Tokisaki but shared some similarities with her original counterpart that was already stated to be the most dangerous and powerful Spirit in her Normal Form. 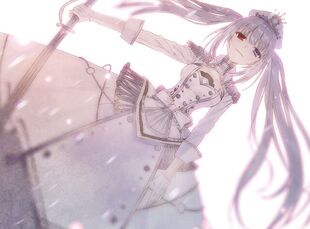 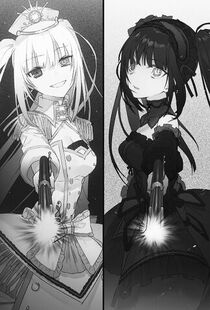 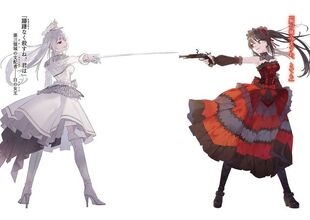 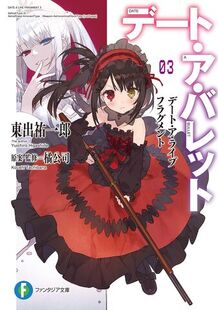 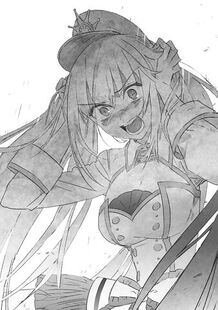 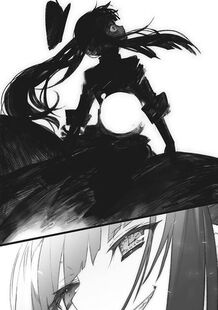 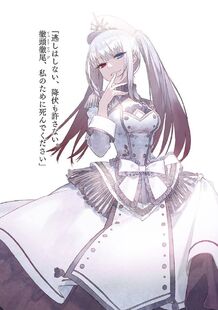 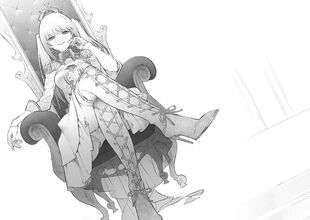 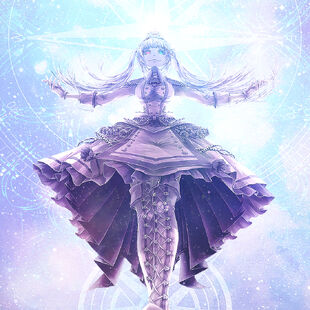 Retrieved from "https://villains.fandom.com/wiki/White_Queen_(Date_A_Live)?oldid=3289068"
Community content is available under CC-BY-SA unless otherwise noted.