Further the goals of its master Lye Batenkaitos (succeeded).

Monsterous Minion
The White Whale is a major antagonist in the 2014 Japanese dark fantasy light novel series Re:Zero - Starting Life in Another World, as well as its anime & manga adaptations. It served as the secondary antagonist of the third story arc.

The White Whale was an incredibly powerful mabeast created by Daphne, the Witch of Gluttony, during the time when the Witch of Envy was free to wander the world. The Whale inherited the power of its creator, allowing it to wipe individuals from living memories by engulfing them in mist. Because of its incredible size, mist production, and flight, the White Whale was a nigh-insurmountable force for the heroes that tried to slay it.

Alongside the Black Serpent and the Great Rabbit, the Whale was considered one of the three greatest mabeasts created by Daphne. For four centuries the beast terrorized the world, laying waste to many settlements and innocent travellers it came across. Eventually, the Whale came under the control of Daphne's successor Lye Batenkaitos, the Sin Archbishop of the Witch's Cult representing gluttony. Batenkaitos used the beast to further the agenda of the Cult.

Fourteen years before the arrival of Subaru Natsuki, the Whale crushed a subjugation force led by the Master Swordsman Theresia van Astrea, killing her in the process. Two months after Natsuki's arrival, the Whale attacked a subjugation force led by Natsuki, Duchess Crusch Karsten, and the Sword Demon Wilhelm van Astrea. Due to Subaru's efforts, Wilhelm was able to kill the beast, avenging his wife in the process.

The White Whale was an enormous mabeast estimated to be around fifty meters long if not larger. Its snow-white skin was as hard as stone and was covered in tiny hairs that scattered magical energy from incoming attacks, dulling their force. Like all mabeasts, the White Whale had a large curved-horn protruding from its forehead. It had a glowing pinkish wheel-like sigil on its back that allowed it to fly. Its eyes, that were usually yellow, turned into a red filled with rage when it felt threatened. 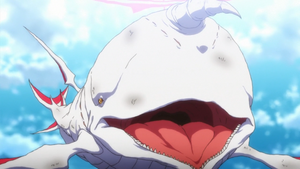 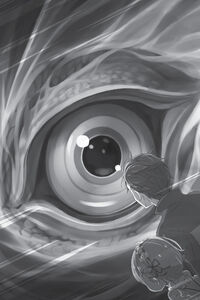 The White Whale seeing Subaru Natsuki through its ginormous eye. 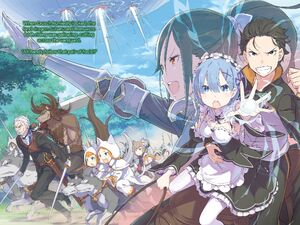 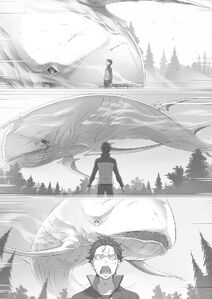 Subaru offering himself as bait for the Whale using his connection to the Witch of Envy. 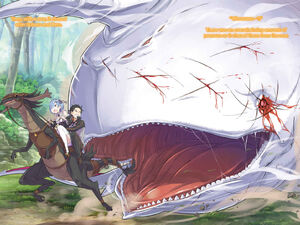 The Whale pursuing Subaru and Rem on the former's ground dragon Patrasche. 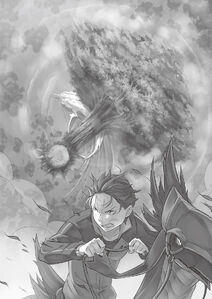 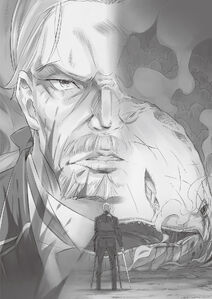 Wilhelm van Astrea preparing to finish off the defeated Whale. 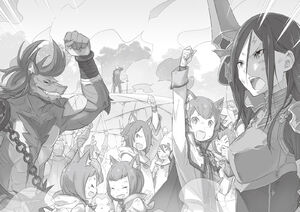 The heroes celebrating their successful conquest over the Whale.